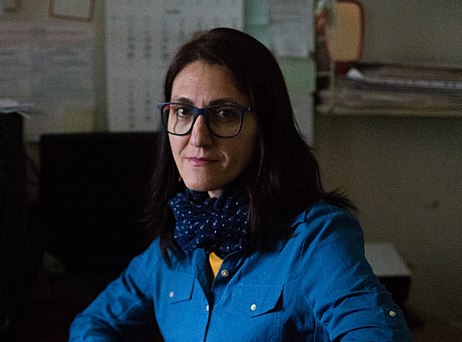 “If you do your work well, if you are a professional and a decent person – that is what will remain in the end.”

Galina Arapova is the director and senior media lawyer of the NGO Mass Media Defence Centre. Beyond this, she is an expert for the Council of Europe working group, Board member of European Center for Press and Media Freedom, and the only Russian lawyer to receive an International Bar Association Human Rights Award for her outstanding contribution to human rights.

Arapova is a renowned media lawyer, specialising in freedom of expression and freedom of information. She has defended journalists and media outlets before both domestic courts and the European Court of Human Rights (ECtHR). What’s more, Arapova has used her expertise to foster greater awareness in Russia and the former Soviet bloc. She is the author of multiple publications on media law and has trained journalists, lawyers and judges in the region.

Recently, the Russian government labelled her not once, but twice, as a “foreign agent”.

Over her 25 year long career as a lawyer, Galina Arapova has worked on hundreds of cases. Her legal team is working 24/7 to provide legal advice and defence for journalists from all around Russia. Recently, they have been challenging the foreign agent status given to journalists and independent media outlets in over 40 cases

We have worked extensively with Arapova over the years. In 2017, Arapova and Media Defence intervened in a case in support of one of Russia’s last independent newspapers, Novaya Gazeta. Roskomnadzor, Russia’s state media regulator, issued the paper with a warning. It alleged that Novaya Gazeta had disseminated extremist material, following the publication of a story about politically extreme organisations in Russia. With Arapova’s support, we submitted an amicus brief arguing that state-controlled regulation of the media can constitute a serious threat to press freedom. In 2021, the ECtHR found that Roskomnadzor had acted unlawfully by issuing the warning.  More on this case, and our intervention in full, can be found here.

“Now, when I handle cases and think of personal security, it feels like another kind of risk level.”

According to Arapova, one of the most daunting cases she supported was early on in her career, back in 1998. A television company had made a video about a supposedly Nazi group in Voronezh, near the Ukrainian border. The young men of the Russian National Unity (RNU) marched in black uniforms with red armbands, as the Nazis did. The RNU chapter in Voronezh filed a lawsuit against the television company for this comparison.

Arapova provided the defence for the television company based on its right to freedom of expression. In court, her team had to prove that RNU members not only looked like Nazis, but thought like them too. As the trial commenced, RNU started making death threats against Arapova and the journalists involved. After a while, when the judge did not take the threats seriously, Arapova had to leave Voronezh for a month. Soon after going into hiding, Arapova heard that the RNU was dwindling and had been declared an extremist organisation. Even now, when Arapova takes on powerful actors, she rarely feels the same level of personal risk as she did for that case.

Adopted in 2012, Russia’s “foreign agent” law has changed how the government silences dissent. Alongside their traditional methods – defamation lawsuits, violence, assassination – authorities can leverage this legislative extension of its anti-West propaganda to control critical voices. Under the repressive law, any individual or organisation that receives funds from abroad can be designated a “foreign agent”, even if they are not acting on the orders of any foreign entity.

The phrase “foreign agent” in Russian (иностранный агент) has strong associations with cold war-era espionage and treason. Amongst those the government have labelled are NGOs, journalists, LGBTQIA+ activists and human rights defenders. Galina was the first lawyer to be designated as such.

Authorities harass those designated as “foreign agents”, with police raiding their homes and administering fines. Recent amendments mean foreign agent NGOs will soon be unable to hold events without the Ministry of Justice’s approval. There is also the risk that, in applying for that approval, a procedural error results in closure. Radio Free Europe/Radio Liberty has been a particular target. Roskomnadzor has fined the outlet more than $3 million since January, frozen its bank accounts and inspected its offices multiple times.

For Galina Arapova, the repercussions are onerous and they have only just begun. For example, on every social media post, at every public lecture she must include a 24-word disclaimer about her status. Arapova suggests that in the near future, this opening disclaimer “will be seen by readers as being as normal as ‘hello’”.[1] A week after she gained “foreign agent” status, she was no longer able to teach the university course in legal regulation of journalism and the internet that she had taught for 12 years. She is also obliged to submit reports on her income and expenses – a requirement she is appealing before the courts on the grounds that it’s intrusive and a breach of her privacy.

As an individual, the penalty for non-compliance can be up to either two or five years’ imprisonment, depending on the type of foreign agent status. To avoid criminal liability, Arapova encourages those with foreign agent status to meet all the requirements set out for them. This doesn’t mean, however, that those targeted shouldn’t fight back. Journalists and human rights defenders are challenging the Ministry of Justice’s decision to label them a foreign agent. They can also challenge the decision to include their name on the corresponding register. Just because it is de jure possible under Russian law doesn’t mean that it meets international human rights standards. For those who do challenge the decision, they should expect a long fight all the way to the ECtHR.

Arapova and her team continue to challenge these foreign agent designations. There are almost a hundred complaints from Russian NGOs awaiting a decision from the ECtHR.[2] Over the years, lawyers have accumulated practical experience from these cases, and have established general rules and directions. Arapova has suggested sharing experience, ideas and document templates to make a “cheat sheet”, outlining how best to dispute the status and comply with its restrictions. This would ease the burden for those affected, and reduce their risk of non-compliance and their reliance on professional support.

Arapova does, however, express concerns that the authorities may start declaring individuals as foreign agents at an increasingly fast pace. This will mean there is a greater need than ever for legal expertise. Consequently, they’ll need considerable funding to cover the lawyers’ work and advice drafting the Ministry of Justice reports. They may also need consultations with tax and finance specialists, not to mention psychological assistance.

Despite this obvious attempt to stifle free speech, Arapova is hopeful that journalists will continue to report critically. Many investigative reporters have to leave the country, but continue their important work after relocation. Independent online outlets and bloggers have a clear mission and will continue to report on matters of public interest. Much like Arapova herself, they refuse to be silenced by the ‘foreign agent’ tag.

This piece is part of our ‘Hope and Resilience‘ series. You can read also our articles on Kelly Duda and Claudia Duque.