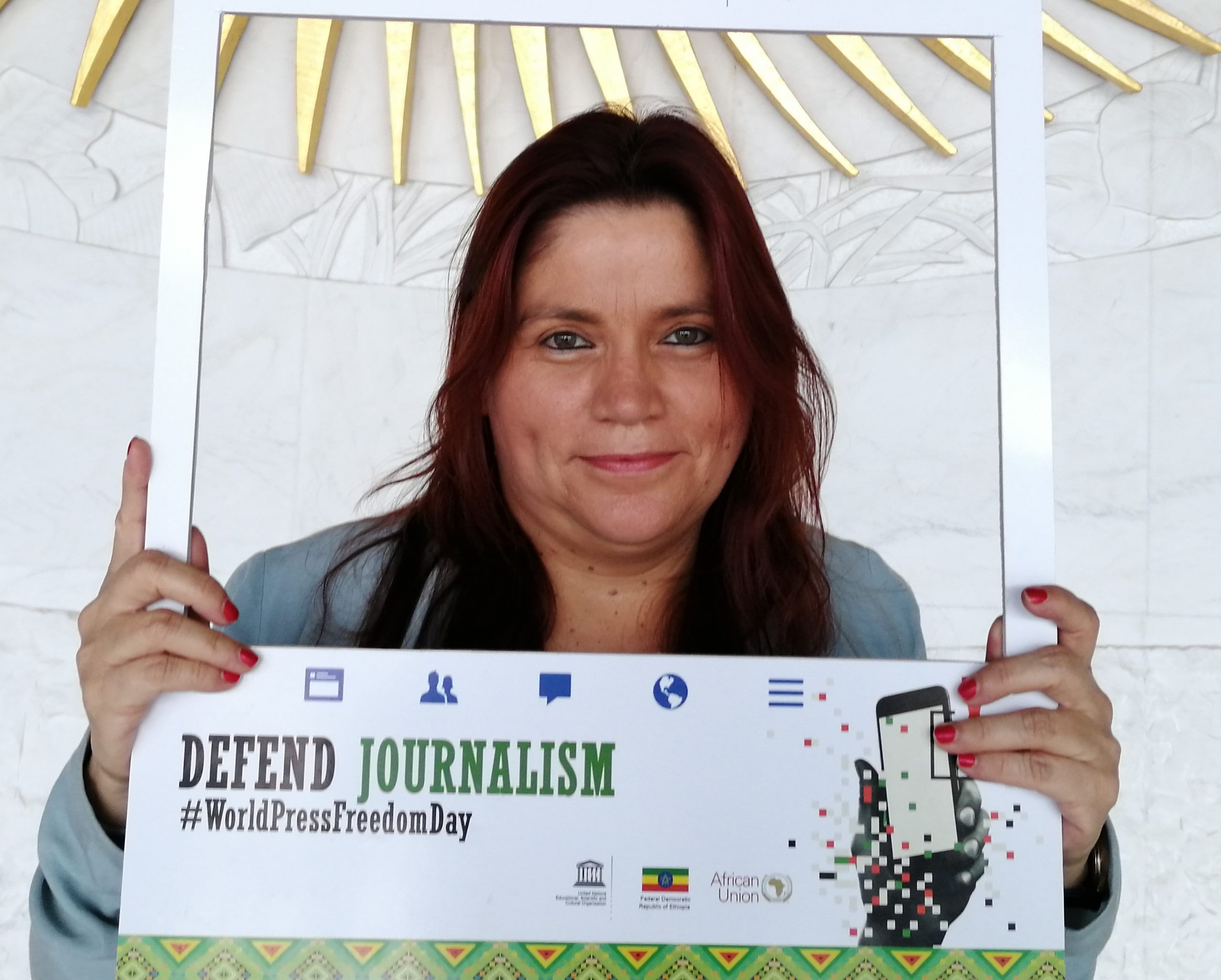 “I ask myself every day whether I’m able to continue with all of this. But I have never doubted that this is my profession and what I want to do.” Claudia Duque, interviewed by Nicolas Guzman 2019 for DW.com.

The courageous and passionate Claudia Duque is an award-winning Colombian journalist who, along with her daughter, has been subjected to a prolonged campaign of harassment, violence and surveillance for twenty years. With our support, Duque has spent years challenging the abuse she has endured before national and international courts. But Duque has defied the threats and abuse from some of Colombia’s most powerful actors, and continues to report on human rights abuses.

The case of Jaime Garzón

The assassination of fellow journalist Jaime Garzón in 1999 was a pivotal moment for Claudia Duque.  Garzón was driving to work when two men intercepted and shot him repeatedly in the head and chest. As a household name in Colombia, Garzón’s murder shocked the nation.

In 2001, two years after the murder, the prosecution had failed to bring anyone to justice. With no faith in the bungled criminal investigation, Duque decided to actively investigate the assassination herself. And this decision was to fundamentally change her life forever.

Duque convinced Garzón’s brother to appoint a lawyer to represent the family in the legal process. Moreover, this new lawyer was open to supporting Duque in her investigation, providing access to all the relevant documents. But it didn’t take long for the irregularities in the case to catch up with her. Soon Duque was being followed whenever she left her house; tailed by suspicious, unknown cars; receiving anonymous, threatening phone calls. The harassment came to a head in July that year, when she was kidnapped, robbed, and told to let “the dead rest”. For her own safety, Claudia Duque fled the country in September 2001.

In 2002, Claudia Duque returned to Colombia to continue with her investigation, in spite of the continued harassment.

Having made a note of the license plates of the cars that had followed her the year before, Duque managed to trace one of them back to the Colombian secret police. Known as DAS (the Administrative Department of Security), the Colombian secret police conducted counter-intelligence on both internal and external threats. And as Duque probed further into her colleague’s death, she began to uncover evidence that linked DAS to its cover-up.

Unfortunately, the fact that Duque was beginning to circle the truth didn’t escape her harassers. As a result, DAS ramped up their campaign of intimidation. They made it apparent that they had access to all Duque’s email and phone calls. They even began making threats of physical and sexual violence against Duque’s young daughter. Duque had no choice but to go into exile once more in December 2004.

Claudia Duque came back to Colombia in 2006. In light of the continued threats against her, the Colombian government provided her with a security detail. But in 2007, the Ministry of Interior withdrew the security detail, citing an occasion on which Duque had driven somewhere without her bodyguards to justify the decision.

In response, Duque asked the Ministry of Interior to review the decision and took them to court. It was during this case before the Constitutional Court that Duque learnt, rather than protecting her, the bodyguards had been spying on her. DAS and the Ministry of Interior submitted reports gathered by her bodyguards, monitoring her movements and recording her activities and views. When, in 2008, the Constitutional Court ordered DAS to surrender all the files they had on Duque, she was finally able to assess the extent of their surveillance.

With access to these documents, Duque was able to concretely prove that DAS was behind the campaign of persecution. What’s more, she uncovered a systematic and mass campaign of illegal surveillance, phone tapping, email interceptions and bank account monitoring. The surveillance targeted many journalists and human rights defenders – including herself. As a direct result of her investigations, the “Wiretapping Scandal” broke and brought about the dissolution of DAS.

The Fight against Impunity

Claudia Duque filed numerous complaints about her persecution. In the complaints, she accuses the DAS of kidnapping her in 2001 and persecuting her constantly for a decade. Finally, in 2011, an investigation was opened.

Duque presented the evidence to the prosecutor that investigated her case, including the documents surrendered by DAS. She argued that the deliberate and illegal campaign of surveillance, intimidation and harassment – often threatening her young daughter – amounted to psychological torture.

In March 2013 Colombia’s Prosecutor’s Office ordered the arrest of seven high-ranking former DAS agents for the crime of aggravated psychological torture. Despite the progress these arrests represented, however, Duque’s quest for justice was not to run smoothly.

During a judicial inspection in 2014, the Prosecutor’s Office was unable to find some of the information it had on file pertaining to Duque’s case. The evidence was key to the case, constituting the computer files seized from DAS, including the complete database of the illegal activities carried out against targets. In 2009, these files were over 54 gigabytes (Gb) in size. Yet, at the time of the judicial inspection, the files were only 91 megabytes (Mb). Everything but the resumes of DAS officials and entrances and exits to the headquarters of that organisation had been lost. The disappearance of the entire DAS digital dossier covering the period 1959-2011 meant it was impossible to achieve justice in not only Duque’s case, but for a vast number of victims.

Of the seven high-ranking former DAS agents arrested in connection with the cases, only three were convicted.

Colombia’s Attorney General recognised in 2017 that, as psychological torture constitutes a crime against humanity, it is not subject to any statute of limitations. This helped Claudia Duque’s position when she filed her case before the Inter-American Commission on Human Rights in 2018. In this case, Duque is challenging the human rights violations she faced over the years, including her right to privacy, the impact on her freedom of expression, and the resulting lack of justice.

In addition, Duque and three other women have filed a tutela to the Constitutional Court relating to Colombia’s COVID-19 contact tracing app. Despite not being mandatory, not having the app meant that Duque was denied boarding on a flight. Duque and the other plaintiffs are challenging the app before the Constitutional Court, arguing that it violates people’s privacy and freedom of movement. We intervened on this case through an amicus brief showing the effects that this particular measure has on the protection of journalistic sources. More can be found on this case here.

Even now, Claudia Duque continues to experience surveillance under the guise of security measures. In February 2020, multiple reliable sources made Duque aware of an order to infiltrate her protective scheme. This included monitoring her movements through the GPS installed in her armoured vehicle, recording the dates, times, addresses and routes of her journeys. There were even reports from these same reliable sources that the tracking would culminate in an attempt on Duque’s life. Duque reported this to the Prosecutor’s Office just days before the Covid-19 lockdown measures came into effect in March.

In June 2021, the Colombian government submitted a document to the Inter-American Commission on Human Rights. This document confirmed that the State and the National Protection Unit (NPU) were monitoring Duque, and all other citizens under protective measures, through GPS. Duque filed a petition in response, requesting the records of her tracked movements and proof of her consent. Of course, neither the government nor the NPU had ever obtained consent from Duque for this invasion of her privacy.

Two months later, Duque finally received a response with over 25,000 location records tracking her movements through the vehicle’s GPS. The records dated back to February 2021 with previous recordings deleted periodically. The detailed records provide more than enough information for a would-be assailant to learn Duque’s routine and intercept a journey.

Duque has gone public with this information, in the hope that it sheds light on the blurred line between protective measures and intelligence activities that impact threatened Colombian citizens.

Claudia Duque continues to be a formidable force in the field. Among the topics of her journalistic work are forced disappearance, recruitment of minors by armed groups, the impact of impunity and the right to justice, and the infiltration of paramilitary groups within Government entities. More recently, Duque has been investigating how corruption enables human rights abuses.

Duque currently works for Radio Nizkor, a digital information project for the human rights NGO Equipo Nizkor. Throughout her career, however, she has written for multiple national and international publications. She is also an honorary member of the National Union of Journalists of the United Kingdom and Ireland, and of the International Federation of Journalists (IFJ).

Duque has received several international awards for her work and her courage. In 2010, the International Women’s Media Foundation awarded Duque the Courage in Journalism Award. In 2011 the Daily Beast named her one of the 150 outstanding women around the globe. Then, in 2014, Reporters Without Borders named her as one of the “100 Information Heroes”.

Duque’s daughter, María Alejandra Gómez, now spearheads her mother’s fight for justice. She qualified as a lawyer and in 2018, filed a complaint before the Inter-American Commission on Human Rights (IACHR) for the persecution she and her mother endured from 2001 to 2008, as well as for the successive threats and attacks that both women have suffered over the years. We are supporting Gomez and Duque with this case at the IACHR.

“As a victim, I will fight until the last day of my life for real justice.” Claudia Duque

To read more stories like this, keep an eye on our “Hope and Resilience” series.