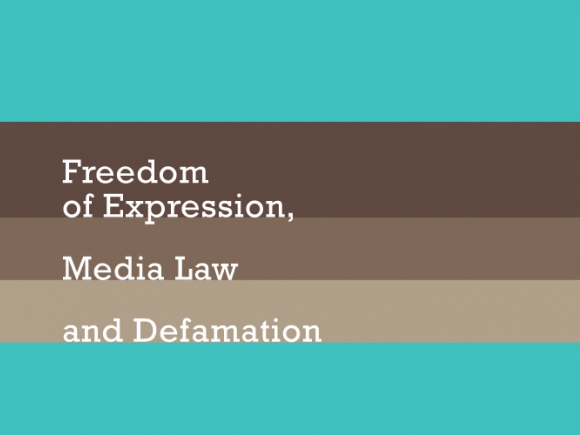 The manual, which summarises European legal standards related to freedom of expression and the protection of reputation, is now available in Greek, Turkish, Italian and Russian.

“Freedom of Expression, Media Law and Defamation” is intended to provide support to lawyers representing media practitioners who have been sued or charged with libel, while also helping journalists to understand their rights under international and European human rights mechanisms.

The manual is accompanied by a set of training materials that allow for qualified trainers to prepare and carry out workshops on defamation law and freedom of expression in European countries. In addition to transmitting essential knowledge, the workshops provide an opportunity for participants to actively practice working through litigation strategies using case studies and moot court scenarios.

MLDI and IPI first launched the manual in 2015 in English, Croatian, Macedonian, Portuguese and Spanish.

IPI Director of Press Freedom Programmes Scott Griffen said that the manual responded to a need to strengthen the defence of journalists in defamation cases.

“Our research shows that the abuse of defamation laws remains a serious problem in Europe,” he explained. “Across the continent, we see far too many cases in which powerful figures react to scrutiny of their actions with defamation lawsuits or threats of lawsuits in order to intimidate and silence journalists. It is important for journalists and lawyers to be fully aware of the European legal standards that are in their favour, especially when governments and courts have failed to proactively implement those standards.”

He added: “We are pleased to be able to offer this tool for use in Greece, Turkey, Italy and Russia, all places where the misuse of defamation laws remains a hurdle for the free flow of information.”

MLDI Legal Director Padraig Hughes noted: “It is important to ensure journalists across Europe are aware of the defamation law standards developed by the European Court of Human Rights in Strasbourg. These standards provide important protections against defamation claims deliberately designed to interfere with the right to free expression on matters of public interest. We hope this manual will contribute towards successfully defending journalists against such claims.”

The manuals are also complemented by an English-language online e-learning series.

Based in London, MLDI is a non-governmental organisation which helps provide legal defence to journalists, bloggers and independent media across the world. It works extensively with lawyers in several European countries to defend cases against the media, including by taking cases to the European Court of Human Rights – the court of last resort for all European journalists who allege violations of their right to free expression set forth in the European Convention on Human Rights.

Based in Vienna, IPI is a global network of editors, journalists and media executives dedicated to the defence of media freedom and the free flow of news. IPI’s research and monitoring work on defamation laws in Europe includes the report “Out of Balance”, which revealed the failure of the majority of EU countries to bring their defamation laws in line with international standards.

In 2015, IPI launched its Media Laws Database as an easily accessible catalogue of criminal and civil defamation laws in Europe and elsewhere.