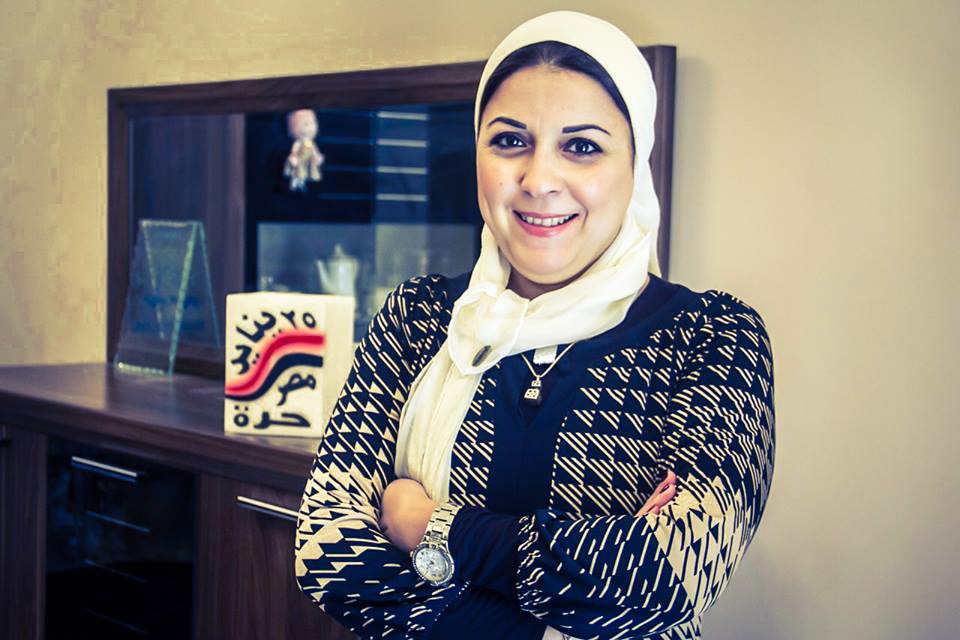 Egyptian journalist, activist and human rights defender, Esraa Abdel Fattah, has instructed a team of expert international lawyers to challenge her continued mistreatment by the Egyptian State. This mistreatment includes a travel ban, imposed on Christmas Eve 2014, which prevents her leaving the country. Her legal team has filed an urgent appeal with the UN’s Special Rapporteur on the promotion and protection of the right to freedom of opinion and expression, Mr. David Kaye, calling on him to take urgent steps to protect Esraa and to call on the Egyptian authorities to comply with their international legal obligations. The call has been echoed by the New York based Committee to Protect Journalists (CPJ) which has now called for Egypt to lift the travel ban on Esraa.

Esraa is a well-known and respected journalist and activist.  She is known as the “Facebook Girl” due to her prominent use of social media to organise and support public protests in Egypt. In 2008, Esraa set up a Facebook group calling for a textile workers’ strike in an industrial town, and was subsequently detained for her involvement in supporting the movement. She later went on to help organise the 2011 Arab Spring protests, which brought about the end of President Mubarak’s 30-year rule. She also acted as a vital source on the ground for the international media during the protests. Her involvement in the events of 2011 resulted in her being nominated for the Nobel Peace Prize. She has also been commended for her work by Glamour Magazine (she was named one of its Women of the Year for 2011), Arabian Business Magazine (who named her one of the 100 most powerful Arab women) and Freedom House (who awarded her the New Generation Democratic Activist award in 2010).

On 13 January 2015, Esraa was about to board a flight to pursue a scholarship abroad when she first became aware that she was under a travel ban. She later established that a few weeks earlier, on 24 December 2014, her name had been added to a travel ban list that contained the names of political leaders, bloggers and civil society activists suspected of having received “foreign funding” – part of the now notorious Case 173 investigation into media organisations and NGOs suspected of receiving foreign funding and being critical of the authorities.  Two years on, Esraa is still prevented from travelling abroad, and has been unable to fully determine the reasons behind the ban.

The Egyptian authorities have used a range of repressive measures and threats to silence Esraa, beyond the travel ban itself.  In November 2016 she lost her job as a journalist as her employer was coming under pressure from the security services to fire her. She is subject to constant, intrusive surveillance, in person and online.  The authorities have in the past week taken action to cut off encrypted telecommunications services such as the app ‘Signal’ upon which journalists and activists rely. She has been harassed and threatened.  She has also seen fellow journalists and activists who are under investigation through Case 173 arrested and subject to asset freezing or seizure.  The combination of these measures and threats means that it is impossible for her to continue her work as a journalist.

Esraa has instructed Howard Kennedy, Doughty Street Chambers and NGO the Media Legal Defence Initiative (MLDI) to take action. Their urgent appeal to David Kaye sets out “multiple ongoing infringements of Ms. Abdel Fattah’s right to freedom of opinion and expression, as part of the Egyptian authorities’ continuing clampdown on civil society and its stifling of critical voices.”  The appeal states:

“The situation is exceptionally urgent: while the travel ban remains in force, Ms. Abdel Fattah’s freedom of expression continues to be wholly compromised, and she remains at constant risk of arbitrary arrest, detention, seizing or freezing of her assets, and other mistreatment.  There is also particular urgency given recent developments and the escalation of the measures used to stifle and disrupt the Egyptian human rights movement, and the escalation of the campaign against Ms. Abdel Fattah (on 17th November 2016 she was fired from her job as a journalist, due to “security pressure”…).  We are also deeply concerned that there has been a pattern in recent years of draconian steps being taken over the Christmas period: for example, the arrest and charging of a number of Al Jazeera journalists on 29th December 2013… and the adding of Ms. Abdel Fattah’s name to the travel ban list on 24th December 2014.”

Barrister Caoilfhionn Gallagher of Doughty Street Chambers says, “Egypt continues to use threats and intimidation against its critics, in order to stifle their voices. Esraa has long been a strong voice supporting free speech, democracy and women’s rights in Egypt, and for that she has been imprisoned, intimidated, threatened and she is now barred from leaving the country.  We call on the Egyptian government to halt its campaign against Esraa and to lift the travel ban immediately”.

Partner at Howard Kennedy, Mark Stephens CBE, an international media law expert, says “Freedom of Speech for journalists like Esraa is an essential check and balance in a democracy, and even more so in an autocracy such as Egypt.”  He added, “Esraa’s case is yet another example of the Egyptian authorities’ disregard for freedom of expression. In recent weeks the Journalists’ Syndicate leaders have been sentenced to two years in prison for fearlessly reporting the truth; a television host has been barred from travelling without due process or any explanation; and photojournalist Shawkan remains imprisoned in Cairo without trial, where he has been held since 2013.

Jonathan McCully, legal officer at the Media Legal Defence Initiative, an NGO that provides legal defence to journalists and bloggers around the world, says, “Esraa’s travel ban does not only physically restrain her from travelling abroad. It acts as a punishment and a deterrent; a punishment for adopting the increasingly vital role of citizen journalist and social media activist in Egypt, and a deterrent against speaking out against the political status quo. Her travel ban is a clear violation of her human rights and should be lifted immediately”.

4.The travel ban was first imposed on 24 December 2014, although Esraa did not learn of it until January 2015 when she attempted to travel from Cairo airport.

5. There is a twitter campaign supporting the call for the travel ban to be immediately lifted, which can be found through the hashtag #LetEsraaFly.  Esraa Abdel Fattah’s twitter handle is @esraa2008.