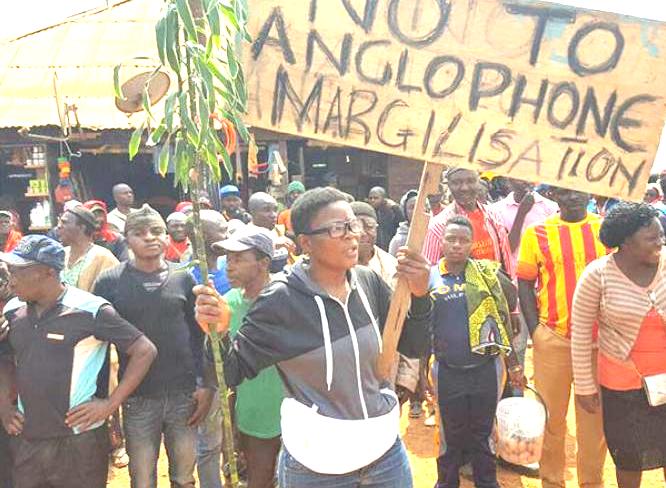 Since 2016, Cameroon’s Anglophone region has been marred by a cycle of civil unrest and serious human rights violations which have claimed more than 3,000 lives. In response to legal measures introduced by the Cameroon government, teachers, lawyers, students and activists took to the streets demanding greater recognition of their political, social and cultural rights.

Ongoing violence by state agents and armed separatist groups has resulted in a steady decline in press freedom and freedom of information across the region. Journalists reporting on the Anglophone crisis have been systematically targeted by anti-terrorism and national security legislation to deter them from reporting. In most cases, journalists have been held for lengthy periods in pre-trial detention, often without access to a lawyer. For example, Samuel Wazizi, a journalist  arrested in August 2019, was held incommunicado in pre-trial detention on anti-terrorism related charges because he criticised the government’s handling of the ongoing conflict between state forces and separatist groups. Media Defence worked with his legal counsel in Cameroon in two sets of Habeas Corpus proceedings brought to court in order to find out what had happened to him.

On 5 June 2020, it was confirmed by the government that Mr Wazizi had died in detention, and it was claimed that the cause of his death was severe sepsis. There was no autopsy, and Mr Wazizi’s body has still not been returned to his family. In August 2020, Mr Wazizi’s counsel, supported by Media Defence, filed an application on behalf of his family at the High Court requesting that the Court order an independent and impartial inquiry into Mr Wazizi’s death. That case is ongoing and has been subject to a number of unusual and unnecessary delays. The detention, disappearance and death of Mr Wazizi, is likely to have a chilling effect on the practice of journalism in the Anglophone regions

Similarly, Kingsley Njoka, a journalist whose reporting for CANAL2 TV at the peak of the escalation of the Anglophone crisis in 2017 was critical of the government, was arrested by four armed men on 15 May 2020 and has been detained for six months on allegations of secessionism and collusion with an armed group. As the offences fall within the purview of the anti-terrorism law, if tried and found guilty, Mr Njoka may face penalties ranging from life imprisonment to a death sentence.

Contrary to international law standards that impose restrictions on the use of military courts and tribunals for civilians, several Anglophone journalists have been tried at military courts. For example, Mr Njoka will appear before the Military Tribunal of Yaounde instead of a civilian court. Further, Tsi Conrad, a freelance journalist, was sentenced to fifteen years in prison because he recorded and then disseminated videos of violent clashes between protesters and police at a rally. He was charged with terrorism, secession, hostility against the state, contempt for civil authority and spreading of false news before the Yaounde military tribunal, alongside 25 other Anglophone detainees including two journalists, Mancho Bibixy and Thomas Away. While in detention Mr Conrad was sentenced to a further 18 months in prison for ‘resistance’ under the Cameroonian Penal Code for participating in a peaceful protest with other Anglophone inmates calling for fairer treatment. Media Defence has supported Mr Conrad’s lawyers in the appeal proceedings and is representing him before the UN Working Group on Arbitrary Detention (UNWGAD) in a case challenging his ongoing detention. Mr Conrad’s arrest, detention and conviction are designed to prevent him from pursuing his journalistic work, as well as being part of a broader campaign of intimidation.

In a clear sign of the Cameroon government’s determination to stifle dissent in the Anglophone region, in January 2017, following protests against the arrest of civil society leaders resisting government efforts to impose the Francophone legal and educational systems on the region, the government of Cameroon shut the internet down. Media Defence and local law firm Veritas Law, filed a series of challenges, including a constitutional challenge, arguing that the internet shutdown amounted to a serious violation of the right to freedom of expression. The day after the first case was filed by Media Defence and Veritas Law, the internet was turned back on by order of the President of Cameroon. The Constitutional Court dismissed the petition on the basis the applicants lacked standing.  In 2019, Cameroon barrister Emmanuel Nkea, Media Defence and Mayer Brown filed two complaints before the African Commission on Human and People’s Rights (ACHPR) alleging the shutdown of the internet (17 January -20 April 2017) and the shutdown of access to social media and messaging platforms (1 October 2017 – 28 February 2018) violated Article 2 and Article 9 of the Charter. Those two cases have now been joined.

Overall, the situation for journalists in Cameroon remains bleak. Where journalists report on the ongoing tensions between the government and separatists, or where they are critical of the government generally they face charges of terrorism and national security crimes, often ending up being tried before military courts and held in pre-detention for lengthy periods without proper access to a lawyer. Lawyers representing journalists have increasingly been targeted by authorities and have faced arbitrary arrest, called before military tribunals as well as being forced to go into hiding.

In order to defend media freedom and freedom of expression, Media Defence will continue to act for journalists before international and regional courts and continue to support and work alongside lawyers in domestic cases in Cameroon.