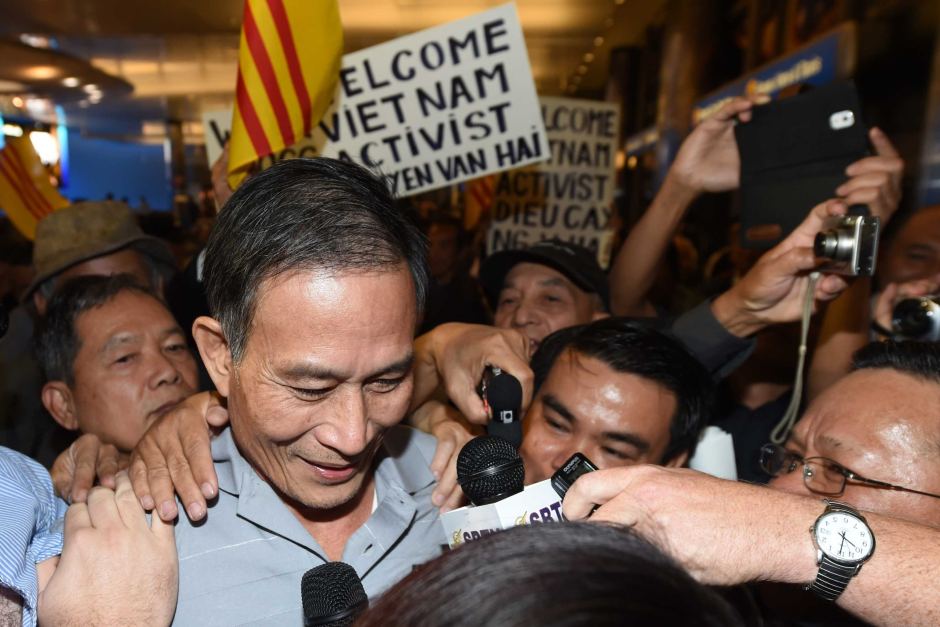 He spent more than six years in prison on trumped-up charges. He was arrested in January 2008 after demonstrating alongside other bloggers, calling for a boycott of the Beijing Olympic Torch relay that was due in Vietnam in April. He was initially sentenced to a 30-month prison sentence for “tax-evasion”. In 2012, he was sentenced to a further four years for “conducting propaganda against the Socialist Republic of Vietnam”. He was released in 2014 on the condition that he left the country immediately. He has since been living in exile in the United States.

MLDI provided financial support for his legal defence in Vietnam, and following his imprisonment we petitioned UNESCO for his release.

In an open letter to MLDI, Dieu Cay recounts what happened after his release from jail into exile and his intention to continue advocating for other prisoners of conscience and to raise awareness about human rights abuses in Vietnam:

The day when I left Vietnam on October 21, 2014, as the plane took off, I looked back at my own country where I had spent so many days of hardship in communist prisons, where many of my friends still continue their constant search for the freedom of my country, and I knew that I must continue our struggle so that one day I could return to my free and democratic, native land.

I realize from that day onward what I do will no longer be just for me but for all my fellow prisoners of conscience. I must help them tell the world how the rights of Vietnamese citizens, especially in prisons, are violated. I have to continue on my chosen path so that everyone in my native land will enjoy the human rights as asserted in the international convenants to which Vietnam is a signatory.

Since the day I was released from prison and immediately forced to choose a life of exile in the United States, I have met with members of the Department of State, legislative members of the White House, members of Canada’s House of Commons, and many international non-governmental organizations such as the Committee to Protect Journalists (CPJ), Human Rights Watch, Amnesty International,and members of the media … to plead for their intervention and help to secure the release of my prison mates and to raise more awareness of the extent of human rights violations in Vietnam.

Most recently, on May 1, 2015, World Press Freedom Day, I had the honor of meeting with President Obama and I shared with him my goal for press freedom in Vietnam. I also urged him to ask the Vietnamese government to release all prisoners of conscience and to abolish the ambiguous legislations that Vietnam has been using to take away the freedom of expression of its citizens.

After 6 years 6 months and 11 days in 11 different communist prisons, I have realized that the communist brutality is even more evil than I thought. To punish dissidents they stop at nothing, including stigmatization on all media outlets, imprisonment in 1m8-long and 2 m-wide cells with only a 30cm slit for air, and in solitary cells with only iron bars and metal roof exposing us to the scorching sun. Toilets are also in the cell. On hot days, we have to cover our faces with wet towels to survive the stench and the heat.

All the rights of prisoners as specified in Vietnam’s current criminal laws are non-existent for prisoners of conscience: the rights to read, to write, to have access to information, and reading materials, to participate in cultural activities and sports, to study, to learn a trade … These rights are only for common prisoners, but not us, as we are “categorized” as prisoners of conscience; and prison conditions and treatment are different for “different categories” of prisoners. More importantly, we are all deprived of the right to counsel, and the right to appeal any ill-treatment during imprisonment. Any appeal to the Procurator Office has to first go through prison wardens for “reviews”, who, naturally, never forward it to the appropriate authorities. Any appeal would result only in further and more severe abuses.

These rights are “legally” denied to prisoners of conscience because of the Ministry of Public Security’s Administrative Order No. 37. With this Administrative Order, in effect since 2011, the Vietnamese authorities openly set up series of prisons within prisons for prisoners of conscience, imposing cruel solitary incarceration with no outside contacts for months on end. This has pushed many prisoners to go on hunger strike to protest. I went on two hunger strikes: one for 28 days in Camp B34 (located at 237 Nguyen Van Cu Street, District 1, Ho Chi Minh City), and the second time for 33 days in Prison Camp No. 6 that belongs to the Ministry of Public Security (in Thanh Chuong, Nghe An province). This is the most barbaric prison system that is currently still in existence in Vietnam!

Wherever there is power there is a need for a check and balance mechanism to monitor power so that power is not corrupted. But that mechanism is absent in Vietnam.  That makes Vietnam truly a security police state. The Security Police makes arrests, operates detention centers, conducts interrogation and investigation, assesses evidence, prosecutes, and decides on convictions, dictates prison terms to judges and controls all prisons. It is this absence of an independent judiciary system from the legislative and the executive branches that gives the Ministry of Public Security a free hand to make wrongful convictions, to force confessions, to use inhuman, barbaric, brutal torture in their investigations causing injustice and wrongful deaths to hundreds of victims. “Your death only costs us one piece of paper” is an infamous statement often said by security police and prison wardens to prisoners and suspects. This shows their power over the victims’ life or death because it is always the police who dictate the outcome of an investigation, and it is the prison wardens who will end a prisoner’s life and report it as ‘death by suicide’. Indeed, it only costs them a piece of paper to write off a human life.

There are many other ambiguous legislations, beside the Administrative Order No. 37, that deprive our citizens of their freedoms and rights. The most inhumane are Articles 258, 88 and 79 of the Penal Code. The authorities have used these ambiguous laws to incriminate dissidents and human rights advocates. These legislations enable the Vietnamese authorities to stay in power and maintain their dictatorial state, and they are so sweeping and overbroad that it is impossible to defend against them.

In a totalitarian dictatorship like Vietnam, all means of communication are under the control of the State. People would not dare to express their political opinions for fear of reprisals and arrest without trials such as the unjust cases of the Nhan Van Literary Affairs, the Anti-party Revisionists, and many others. More personally is the case of our Free Journalist Network, to which I am a witness and surviving victim. Our members only expressed our opinions peacefully on the internet, and yet we were arrested and condemned to long prison sentences. Many of my friends and colleagues are either still in jail or released but under constant surveillance by security police.

A state dictatorship, governed by interest groups and for individual gains, that renders our country in rampant corruption, weakens the economy and causes discontent among the people. And yet when the people voice their dissatisfaction, the state uses all devious and brutal methods to silence their dissent.

It is these ambiguous articles that allow the authority to arrest critics of the regime and help to protect and maintain the existence of the dictatorial regime! Only when the people can freely express their political views without fear of suppression and imprisonment, then we can truly have a democratic society in which a life of freedom and happiness for all is guaranteed.

Thank you all at MLDI for your compassion and for your support over the years that results in my newly found freedom.