“I shall defend Stand Up for Zambia to my grave” 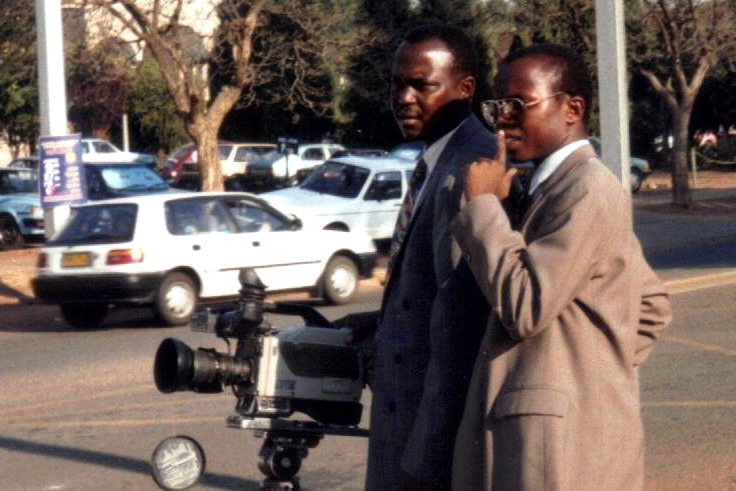 In August 2013, Zambian journalist and producer Chanda Chimba III went to the Catholic Cathedral of the Child Jesus in Lusaka to cover the funeral of a former minister.  With the then president Michael Sata looking on, ruling Patriotic Front activists grabbed Chanda’s camera and dragged him out of the cathedral. “I have never felt so humiliated before in my career as a journalist,” says Chanda.

Chanda believes that during Sata’s presidency he, Chanda, was “a marked man”. His 2011 documentary series Stand Up for Zambia was highly critical of Sata, who at the time was running for president.

“Later, President Sata and the ruling Patriotic Front wanted me to apologise,” says Chanda. “But I said I would do no such thing, as everything in Stand Up for Zambia is based on fact. I stand by it and shall defend it to my grave.”

Chanda’s interest in journalism developed early. Growing up in the 1970s, he took every opportunity he could to read the newspapers and he was inspired by the journalists he saw on television. “The local news sometimes featured BBC reports by Brian Baron and John Simpson,” he remembers. “I told myself that one day I wanted to be like them.”

Today, Chanda has over 30 years’ experience in journalism and has worked in newspapers, TV, radio, and online. Covering Nelson Mandela’s inauguration was a highlight of his 13 year stint with the Zambian national broadcaster and more recently he has produced his own documentaries – “something I am very proud of,” he says.

But it is because of these documentaries that Chanda currently finds himself “in a very precarious situation”.

Having refused to apologise for Stand Up for Zambia, Chanda received so many threatening phone calls that he was forced to change his phone number.

Then, in August 2012, officers from the Government Joint Investigation Team raided Chanda’s home, confiscated his laptop and interrogated him. In January 2013 Chanda was formally arrested and charged on two counts. These were ‘possession of property suspected of being proceeds of a crime’, relating to money Chanda is alleged to have paid to the Zambia National Broadcasting Corporation and the Zambia Daily Mail, and ‘unlawful printing and publication’ of two newspapers he had edited, which allegedly weren’t registered.

Chanda claims that these charges are a direct result of his critical reporting on Michael Sata in Stand Up for Zambia. And while he battles in court, he’s also fighting for his career and livelihood. “The biggest challenge right now is not being able to earn an income,” he says. “The Patriotic Front regime has ensured that I am really squeezed. I am practically blacklisted – businesses and organisations are not comfortable working with me for they obviously fear reprisals.”

MLDI is providing Chanda with much-needed financial support, helping him pay for his lawyer, Major Charles Lisita. “I do not know what would have happened if MLDI had not come in with the grant,” says Chanda. “MLDI has maintained constant interest in the case and is in regular contact with my lawyer.”

Michael Sata was president from September 2011 until his death in October 2014. With Edgar Lungu taking over the presidency, Chanda had hoped for his own fresh start. But with the same party still in power, this looks unlikely. His case is moving very slowly. The magistrate, who is based 300 kilometres from Lusaka, has repeatedly failed to appear for hearings. Chanda says that no reason has been given for his absence.

Despite his difficult financial situation, the threatening phone calls and the public humiliations like the incident in the cathedral – and one at a magistrates’ court in April 2015 when Fred Mm’embe, editor of The Post newspaper and once a close ally of Michael Sata, tried to break his camera – Chanda is determined to stay in journalism. He dreams of launching a TV channel dedicated to news and documentaries, bringing high-quality investigative journalism back to his country.

“My hopes for the future of journalism in Zambia are that intimidation and harassment of media practitioners may come to an immediate end. Journalists must be left to do their work freely.”