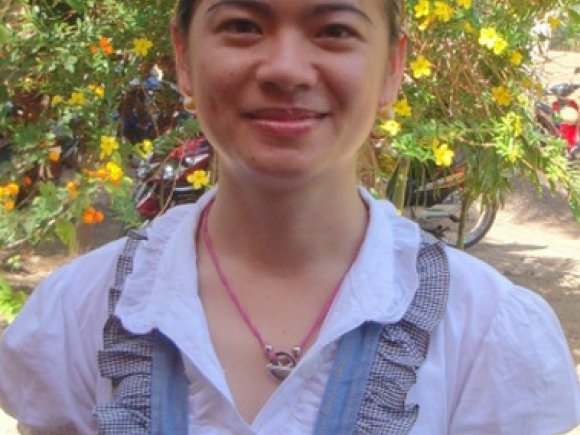 Young photo journalist Minh Man Dang Nguyen has been on hunger strike for prolonged periods of time in recent months to protest the ill-treatment she has received while in detention in Vietnam. As a result of her repeated hunger strikes, she recently weighed only 35 kg.

Minh Man was arrested almost four years ago for taking photos of activist graffiti at an anti-China protest in Ho Chi Minh City. In January 2013 she was convicted alongside 13 other bloggers and activists for committing “activities aimed at overthrowing the government” in what was described as the country’s largest subversion case in years. She was sentenced to eight years in prison and five subsequent years of house arrest. Despite calls for her release, Minh Man is still in prison.

In addition to the lengthy prison sentence and subsequent house arrest, Minh Man is also subject to another form of punishment: increasingly unfair and discriminatory treatment in detention.

Since November 2014, Minh Man has been held in near-solitary confinement in a separate area of the prison that resembles a high-security detention facility. The reasons for this are unclear, but the “disciplinary zone” of the prison where she is held was reportedly newly built for the sole purpose of detaining prisoners of conscience.

Unlike other prisoners, Minh Man is prohibited from taking part in any physical activities and exercise. Interaction with non-political prisoners is not possible. Political prisoners are also regularly verbally attacked and provoked. To make matters worse, Minh Man’s visitation rights have on occasion also been limited. For instance when her mother, once a prisoner of conscience herself, was denied access to her daughter recently. These actions are all aimed at heightening the psychological pressure caused by near-solitary confinement and creating a climate of fear and paranoia.

Minh Man’s treatment is part of a bigger trend. In a 2013 report on prisoners of conscience in Viet Nam, Amnesty International noted that many political prisoners were held in harsh conditions that amounted to cruel, inhumane or degrading treatment. They were subjected to ill-treatment, including by other prisoners, with no intervention from prison guards. Amnesty International further reported that they were often held in solitary confinement or in isolation for lengthy periods of time as punishment. Former prisoners of conscience have confirmed this and reported that they were subjected to solitary confinement and verbal abuse, were denied books and received inadequate food and drinking water, which caused them additional health problems.

As underlined by the UN Human Rights Committee and the UN Special Rapporteur on torture, prolonged solitary confinement, particularly where combined with isolation from the outside world, may amount to torture or other cruel, inhuman or degrading treatment.

Minh Man was joined in in her hunger strikes by Ta Phong Tan, a former police officer and founding member of the Club for Free Journalists, who is serving a ten-year sentence in the same prison as Minh Man. In July 2012, Ta Phong Tan’s mother died from her injuries after setting herself on fire in front of government offices in protest of her daughter’s detention.

The Media Legal Defence Initiative has updated the UN Working Group on Arbitrary Detention on the deterioration of Minh Man’s situation after an earlier petition was filed in December 2014 in the hope that this will support her courageous struggle for improvement of prison conditions.

By Alinda Vermeer, MLDI Legal Officer. This post was first published on the Global Voices blog and is republished with permission and thanks.