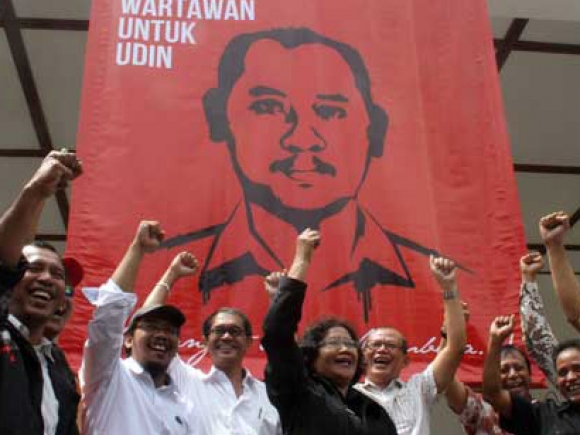 MLDI and a coalition of free speech campaigners from around the world have joined forces to reopen the investigation into the murder of an Indonesian journalist 17 years ago. They have written to two UN Special Rapporteurs asking them to press the Indonesian authorities for action before the case lapses in August 2014.

The murder victim was a journalist called Fuad Muhammad Syafruddinwho had worked for 10 years as a freelance for the newspaper Bernas in the city of Yogyakarta. Writing under the pen-name Udin, he specialised in crime and local politics.

In 1996 he began writing a series of articles about the selection process for the head of the Bantul quarter of Yogyakarta. One article reported that the then-head, Colonel Sri Rosso Sudarmo, had paid a bribe of 1 billion rupiahs (US$111,000) to a foundation run by the then President Suharto to secure his reappointment.

After the articles were published Udin received threats of legal action for defamation and threats of violence, as well as offers of bribes to cease his reporting. When he persisted with his reporting, two men came to his house and attacked him with a metal rod. He was taken to hospital unconscious and died three days later, leaving a wife and two small children.

In October that year, a driver was arrested for the murder, but after initially confessing he said police had bribed him to do so and the case was dropped for lack of evidence. Despite extensive publicity and calls from various organisations for further investigation the case has not been pursued further.

The petition to the UN Special Rapporteurs for freedom of expression and extrajudicial or arbitrary executions is signed by more than 20 organisations including MLDI, Reporters Without Borders, the Committee to Protect Journalists and Article 19 as well as journalists’ and legal groups in Indonesia and South-East Asia. It argues that Udin’s murder is part of a pattern of repression of the press and impunity for violence against journalists in Indonesia and violates the International Covenant on Civil and Political Rights, which includes a duty to uphold press freedom and protect journalists from attacks. Since 1996 there have been 10 other murders of journalists, only one of which has been solved.