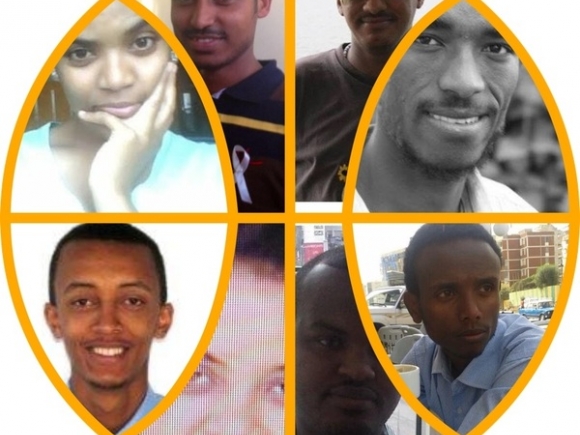 On World Press Freedom Day 2014, MLDI has petitioned the United Nations and African Union to address the arbitrary arrest and detention of nine Ethiopian bloggers, journalists and human rights defenders.

>Befekadu Hailu, Atnaf Berahane, Natnael Feleke, Mahlet Fantahun, Zelalem Kibret, and Abel Wabela are members of a blog known as “Zone9”, which describes itself as “an informal group of young Ethiopian bloggers working together to create an alternative independent narration of the socio-political conditions in Ethiopia” and which had become one of Ethiopia’s leading spaces for campaigns on free speech and constitutional rights.

On 23 April, following six months of enforced inactivity caused by government harassment and surveillance, Zone9 had announced that it would resume blogging. Two days later, on April 25, the six bloggers were arrested, their homes were searched and their laptops and other items confiscated. On the same day, freelance journalists Tesfalem Waldyes and Edom Kassaye were also arrested and a day later, Addis Guday reporter Asmamaw Hailegeorgis was arrested. All nine are currently held incommunicado at Maekelawi prison. They have not had access to their family or lawyers.

No formal charges have been filed against the bloggers and journalists so far, but the majority of journalists and human rights defenders jailed by Ethiopia over the past years, including Eskinder Nega, Reeyot Alemu and Woubshet Taye, have been charged under the 2009 Anti-Terrorism Proclamation, a sweepingly broad piece of legislation that has been used to jail numerous human rights defenders and dissenting voices in the country. MLDI recently filed a case at the African Commission challenging the Anti-Terrorism Proclamation and its use as a tool to stifle free speech in the country.

The Media Legal Defence Initiative leads a group of organisations including East and Horn of Africa Human Rights Defenders Project,  CIVICUS, Global Voices, PEN American Center, the Committee to Protect Journalists and the Electronic Frontier Foundation that has petitioned the United Nations and African Union Special Mandates to immediately intervene to secure the release of the nine human bloggers and journalists. The petition submits that the arrest and detention of the Zone9 bloggers and journalists for the peaceful exercise of their right to freedom of expression violates Ethiopia’s obligations under the African Charter on Human and Peoples’ Rights and the International Covenant on Civil and Political Rights and requests the AU and UN Special Rapporteurs to declare Ethiopia’s actions a gross violation of the bloggers’ and journalists’ human rights.

The petition can be downloaded by clicking here.