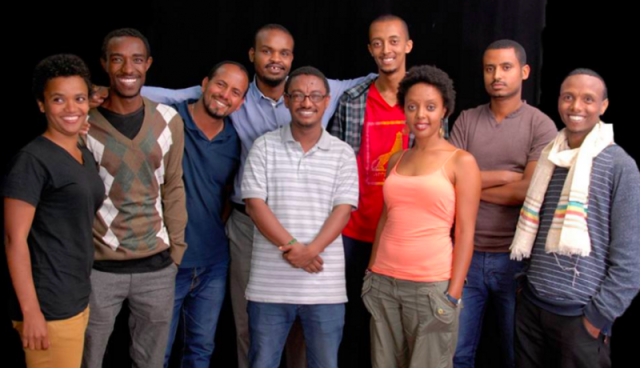 Charges of terrorism were dropped today against four of the remaining ‘Zone9‘ bloggers in Ethiopia who had been charged with promoting terrorism through their reporting. Along with five others who were released in July, they had been detained since April 2014. All are now free except for Befeqadu Hailu, who still faces charges of inciting violence.

The Zone9 bloggers’ collective described itself as “an informal group of young Ethiopian bloggers working together to create an alternative independent narration of the socio-political conditions in Ethiopia”. It had become one of Ethiopia’s leading spaces for campaigning on free speech and constitutional rights.

In April 2014, following months of government harassment and surveillance, members of the blog were arrested under Ethiopia’s draconian anti-terror laws, along with three reporters. Their homes were searched and their laptops and other items confiscated.

Their arrests followed the imprisonment of dozens of human rights activists as well as journalists, including award-winning Eskinder Nega and Reeyot Alemu – all under anti-terror legislation. In July 2015, following a sustained legal and advocacy campaign as part of which MLDI submitted complaints for the bloggers and journalists to various international human rights tribunals, five of the Zone9 group were freed, as well as journalist Reeyot Alemu.

While MLDI welcomes today’s acquittal, we remain extremely concerned at the abuse of Ethiopia’s anti-terror legislation to crack down on independent bloggers and journalists. We note that Eskinder Nega

, whom we represent before the African Commission on Human and Peoples’ Rights, remains imprisoned, and we will continue to advocate for his release as well as the release of Befeqadu Hailu.

Media Legal Defence Initiative is now trading as Media Defence. Along with our new trading name, we also unveil a new logo and website, which will help us reach more journalists in need.   Since our founding in 2008, we have seen the context in which the media operates deteriorate worldwide. With the spread of […]

On June 25th 2020, the ECOWAS Court handed down an important decision for freedom of expression, digital rights, and press freedom, finding that Togo, by shutting down the Internet in 2017, violated the rights of the plaintiffs – seven Togolese NGOs and a journalist. The Court awarded damages to the plaintiffs, and ordered Togo to put […]

The context in which the media operates is forecast to worsen. Insecurity and populism spread, governments copy restrictive and abusive practices from others, and new threats such as online harassment emerge. The COVID-19 pandemic has only accelerated this downward spiral. Attacks on press freedom, including the use of emergency regulations to target those who inform […]