“Really good journalism is about changing what’s wrong with the world.” 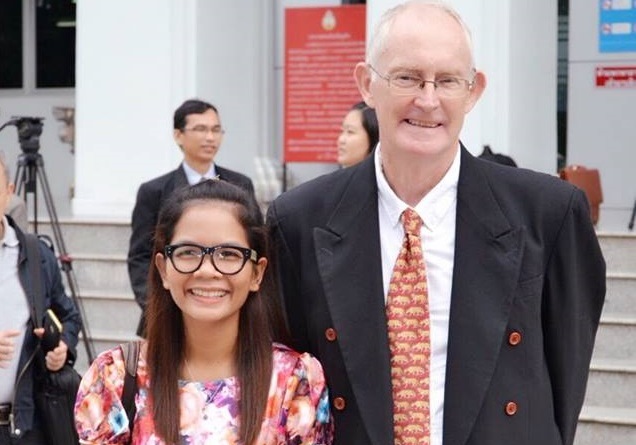 When Alan Morison founded Phuketwan in 2008, its tagline was ‘Sweet Phuket Every Day’. “But we quickly discovered that Phuket wasn’t always sweet,” says Alan. As he and journalist Chutima Sidasathian uncovered one of the biggest stories in the region since the 2004 Tsunami – the plight of Rohingya boat people – they realised their tagline needed updating. It became ‘Brave Enough to Change’. This is a fitting motto for two courageous, compassionate journalists who dared to speak up on behalf of the most persecuted people in the world.

Phuketwan had been reporting almost daily on Rohingya abuses since 2008. As a result, Alan and Chutima became the go-to people for international journalists wanting to cover the story. Chutima worked as a fixer for Reuters journalists who later won the Pulitzer prize for their series on Rohingya.

In July 2013, Phuketwan reproduced – as a direct quotation – a 41-word paragraph from Reuters on Rohingya trafficking that referred to ‘Thai naval forces’. In December, the police knocked at the door. The Royal Thai Navy were suing Alan and Chutima for defamation. If found guilty, they could face up to seven years in jail.

While many NGOs and media outlets voiced support for Phuketwan, Alan says that Reuters “were nowhere to be found. We thought it was a very poor decision on their part that the brand didn’t reflect the courage of their journalism.”

Alan and Chutima had faith that the Thai justice system would do the right thing, but legal costs were a worry. Then they had a call from MLDI offering to pay for lawyers.  “It was a huge relief,” says Alan. “Looking back, the support we got financially and morally was the key to us deciding to fight. I don’t think we’d have had the guts to carry on without that support.”

In September 2015, the Phuket Provincial Court dismissed all charges against Alan and Chutima.  Elation was mixed with frustration with what they’d gone through. “It was a silly thing to fight – it wasted our time and energy,” says Chutima. “But in another way it’s good for Thailand because we can be a case study for other cases. Everybody learns.”

Despite its victory in court, Phuketwan closed its doors at the end of 2015.  The site had featured stories on corruption and tourist safety in Phuket, issues many locals would have preferred to conceal. This unflinching reporting – plus the influential Navy’s hostility – led to sponsors and advertisers pulling out.

“If we’d been a little tamer and quieter with the way we went about our business, things could have been different. But we were never going to do that,” says Alan. His savings could only go so far in keeping Phuketwan afloat and an attempt to find a buyer – someone with the same values, the same desire for change – was unsuccessful.

Post-Phuketwan, Alan has been approached to write a book about his career, which spans 50 years and several continents. Chutima is busy with her PhD on Rohingya as well as working as a field producer for a television documentary. In February 2016, she told her story at a UNESCO conference in Paris about the safety of media professionals. She stressed the risks facing local journalists and fixers: “Getting stories can be very dangerous. Reporters can just fly home, but the local journalists stay. We need protection in the long term.”

Chutima also spoke at a conference in Bangkok organised by Amnesty International, but with police and army officials dressed in civilian clothes in the audience, she couldn’t talk freely. She and Alan believe that the situation for journalists in Thailand is worsening under military rule. “We feel lucky that our case preceded the military take-over,” says Alan. “Anyone who is charged now faces much greater risk than we did.”

But still, Alan urges journalists to be bold. “Journalism these days is more than ever about defining right from wrong. There are certainly some people who think every story must be balanced, but to me, really good journalism is about changing what’s wrong with the world. You can only do that by speaking out, provided you’re sure about what you’re saying. And the lesson we’ve learnt – and what I want to say to the next generation of journalists – is that you may be braver than you think.”