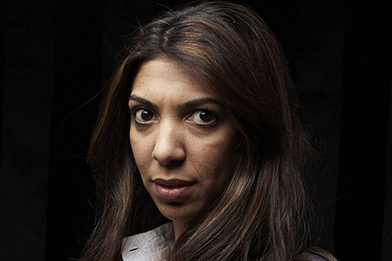 “Because the international press have taken an interest in my case, I have been able to draw attention to the fate of journalists here. What they did to me changed my life forever. Now I have a great goal in my life – to campaign for press freedom.”

I still feel pain when I recall being summoned to the police station on May 22, 2011. I had been covering pro-democracy demonstrations and the authorities didn’t like what I was reporting. I didn’t accept the government line that the protesters were backed by Iran and I had witnessed a policeman killing an old man at protest earlier in the year.

While in custody, I was tortured by police officers. I remember the first slap on my face, the humiliation I felt. I was blindfolded, beaten and had electric shock treatment. All the time, they were mocking me and accusing me of being a protester and lying in my reports.  Eventually, 13 hours later, I was released after signing a document. I don’t know what was in it. I was so frightened, I just wanted to get out. I was in great pain and could hardly walk.

I reported what happened to the interior ministry and they said they would investigate. At first, I thought they were going to take it seriously. I was examined by two government doctors and they confirmed that my injuries were consistent with my account. I was also able to identify the five police officers who beat me.

But I didn’t hear anything about the investigation until December 2011. In seven months, they had done nothing. I then met MLDI and they helped me submit a complaint of torture against the officers, in January 2012. The trial began in February, but only one of the officers was to be prosecuted. This was a big disappointment. Then there were lots of delays. I had to attend many court sessions and hear complex legal arguments. It was very frustrating.

The trial went on for months and the verdict came in October. The defendant was acquitted. I was so shocked. We had very strong evidence, medical reports and even an eyewitness. I just felt that the judicial system was not independent. But with MLDI’s help, I decided to take my case to the appeal court. Friends told me why bother when the system is corrupt, but I was determined to keep fighting.

Earlier this year, the appeal court upheld the acquittal. When I heard this decision, I started to cry.  Mine was the first case of torture to have been investigated by the judiciary. I had thought that I would get justice but it seems that I shouldn’t have been so hopeful. It’s painful to think that the people who tortured you are free to do it again.

But because the international press have taken an interest in my case, I have been able to draw attention to the fate of journalists here. What they did to me changed my life forever. Now I have a great goal in my life – to campaign for press freedom.

I defend journalists’ rights to report fairly and neutrally. So many other journalists have been beaten and tortured. Foreign reporters have to apply for a visa to enter the country and this is rarely granted. None

of our newspapers are independent.

Over the last two years, my case has taken up a lot of time – but I have continued to work. In the first four months after the beatings, I couldn’t do anything. Things that would usually take me one hour, took four days. I then forced myself to cover stories. I was careful what I reported as I was scared of being arrested again. It took me a year to work normally.

In some people’s eyes, my ordeal has made me a member of the opposition. They are wrong.

I remain a professional, objective journalist. The system tried to make me a victim, but it didn’t succeed. I feel I am constantly under scrutiny; that the authorities are just waiting for me to make a mistake. But I’m not someone who gets scared easily. My mother worries that I might be arrested whenever I go out, but she knows my work is important and is proud of me.