“It has allowed ordinary netizens to speak freely without the fear of impending arrest and emboldened them to challenge the culture of censorship.” 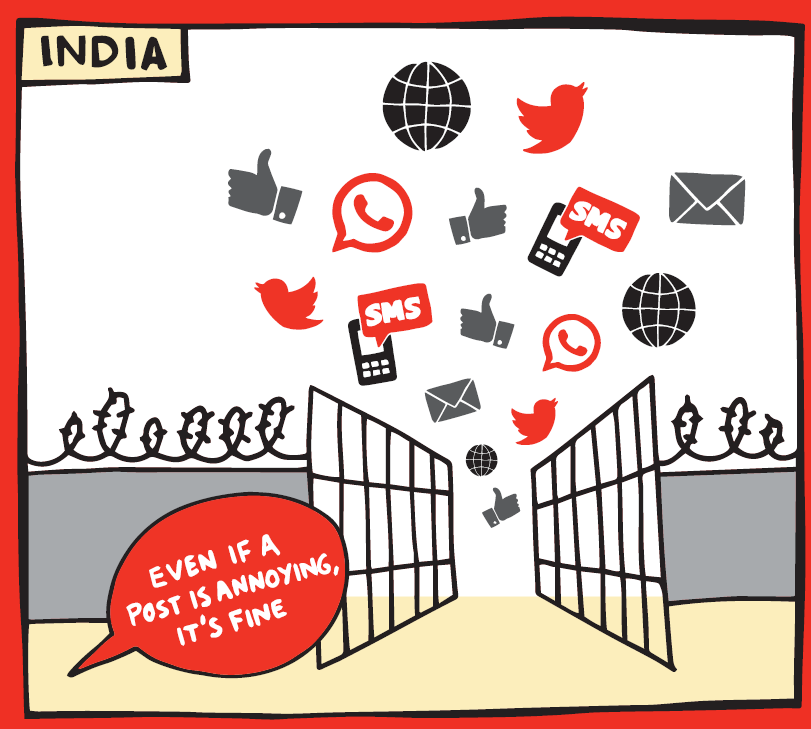 On 24 March 2015, the Supreme Court of India ruled that parts of India’s controversial Information Technology Act violated the public’s right to know and were unconstitutional. Section 66a made it a criminal offence to send through a communication device any information that was “grossly offensive or has menacing character” or to send messages “for the purpose of causing annoyance or inconvenience”. Misuse of Section 66a had become widespread, with hundreds of cases being reported where the provision had been used to punish online speech.

The Supreme Court also clarified the law on intermediary liability in India, stating that section 79 of the Information Technology Act should be interpreted with the right to freedom of expression in mind. It ruled that liability should only attach to intermediaries where they have received a court order. The practice of taking down blogs as soon as there was a complaint from anyone had resulted in censorship.

Mishi Choudhary, Executive Director of the Software Freedom Law Centre (SFLC), counsel to one of the petitioners in the case, heralded the decision as being forward-thinking and pragmatic, describing the Supreme Court as “tech-savvy”. Petitioner Professor Ambikesh Mahapatra who was arrested for circulating a cartoon depicting West Bengal Chief Minister Mamata Banerjee in 2012, said on the verdict that

“section 66A was being used by governments to clamp down on free speech and was restricting citizens from freely expressing themselves. The Supreme Court’s decision comes as a huge relief to people like me who were wrongly arrested”.

In the months that followed the ruling there were both positive and negative developments. For those involved in online discourse, the threat of arrest has diminished and the sites that host them are no longer forced to indulge in proxy censorship or spend legal resources in responding to take down requests.

A further, although unintended, benefit has been an increase in the amount of coverage of the issue of freedom of speech in the traditional media. The press covered the judgment extensively and a month after the Supreme Court’s judgment, the Ministry of Home Affairs reportedly constituted a high level committee to look into security concerns following the revocation of Section 66A. The committee is seeking a constitutionally viable law that will exclude ambiguous phrases such as ‘grossly offensive’ or ‘annoyance’ and that will have necessary safeguards for the protection of free speech. Discussion in traditional media and amongst the general public has become much more informed and these issues have now become mainstream.

However, on the negative side, in response to a recent list of petitions filed before the Supreme Court asking for the decriminalization of defamation, two judges suggested during verbal arguments that new laws could be made to regulate free speech on social media. This comment was in reply to an incident narrated by Senior Advocate L. Nageswara Rao, that serious allegations and rumours about him were circulating on WhatsApp.

In light of worrying developments such as this, the SFLC continues its work to promote freedom of expression online. “We are working with the government and media to ensure that any new laws that are enacted don’t become tools of political censorship and respect the fundamental rights of free speech and expression,” said Mishi. “We write regularly in the media, use electronic media to talk about these issues so it remains in public memory why these issues matter. In a democracy, at the end of the day, issues reside in the hands of an informed voter.”

Describing the value of the partnership from MLDI, which comprised legal advice and financial support, she said that “not many organisations are ready to fund efforts for strategic litigation. In the current environment, where the desire to censor is becoming universal, journalists, bloggers, and internet users need financial support so that they can preserve freedom for themselves and for the next billion who come online. Also the global community they offer is invaluable. MLDI has such great experience working with people in different jurisdictions and this really helped us in adding material to our pleadings.”