“Fighting lawsuits is part and parcel of what we have to do – if you want to protect an ideal, there’s a price you have to pay.” 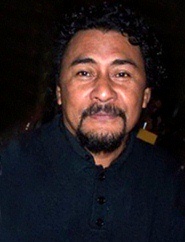 Samoa came 40th in the 2015 World Press Freedom Index – higher than the USA. So are things good for journalists in Samoa?

Media freedom is something we’ve had to fight hard for. The media in Samoa was deregulated less than 20 years ago. We had to convince the government that this was an important part of being a democracy. If we had an open media and well-trained media practitioners, it would help the development of the country. Today, we’re quite free in the media and our political leaders are fairly accessible. But 30 years ago, times were really tough – media outlets were damaged, printers were burned, people were physically attacked. So we should really hold on to what we’re enjoying now.

What does ‘Talamua’ mean in English?

It’s a word we coined ourselves. ‘Tala’ means ‘story’ and ‘mua’ means first. So ‘Talamua’ means ‘first story’ or ‘first word’ and that’s our slogan – we like to break stories. We’re proud of our journalistic ethics and standards. Sometimes we get into trouble, but we try to stay away from it as much as we can.

In April 2015 a Samoan lawyer from Auckland, Olinda Woodroofe, sued us for defamation and $1 million tala [388,500 US dollars]. One of her clients, a Samoan man also living in Auckland, had lodged a complaint against her with the law society in Samoa about how she was handling his case. We were given a copy of the complaint, so we wrote a story about it and emailed the lawyer with questions. We added her comments to the story, checked all our facts and published it. We expected to be disliked for it, which is what happened.

How did you feel when you heard you were being sued?

We had been sued twice before – both cases were dismissed.  So we see fighting lawsuits as part and parcel of what we have to do. If you want to protect an ideal, there’s a price you have to pay – that’s how the world works. When the lawyer threatened us, we checked our facts and agreed we had everything covered. As far as we were concerned, the story was representative of both sides. But the legal costs were a concern.

When did MLDI get involved?

I remembered a colleague from Tonga who had had help from MLDI. I got in touch with them and explained our situation. At their request, I got quotations from lawyers here in Samoa, but they were expensive. MLDI came up with a better option: they scouted for a lawyer and found Ben Upton from Simpson Grierson in Auckland. Having a well-respected, 120-year-old firm representing us had a big impact on the plaintiff and the case even before it went to court.

What did MLDI’s help mean to you?

It was very comforting and confidence-boosting to know that we had MLDI behind us. You have this organisation in London, these people who you’ve never met, but there’s an ideal that you’re both trying to protect that brings you together. Journalists in remote regions around the world really need an institution like MLDI, who can defend the small people standing up in the name of media freedom.

Tell us what happened with the case.

It wasn’t without a fight – the case went to court seven times. Then the lawyers started negotiating a withdrawal.  The plaintiff wanted us to pay her legal fees and to publish an apology. I turned this down, as I knew we’d done nothing wrong. I said we’d pay our fees, she could pay hers and we would withdraw the case. She accepted eventually – in July 2015 – and it was a big relief for everybody.

Do you feel more cautious now about what you publish?

We still maintain our boldness. We have to go into things that could burn our feet. But yes, we’re more cautious. We have to be attentive to the details. Sometimes as human beings we fail to do basic things, but in journalism we can’t afford to do that.

How does the future look for Samoa’s journalists?

We have our own professional media association and a training programme based at the university. We’re looking to upgrade standards, improve ethics and, importantly, to stay on top of technology. We see being sued as a training opportunity – what we did right and what we did wrong can be something people can learn from. We need to help the young journalists coming through so that they can keep running with the baton.