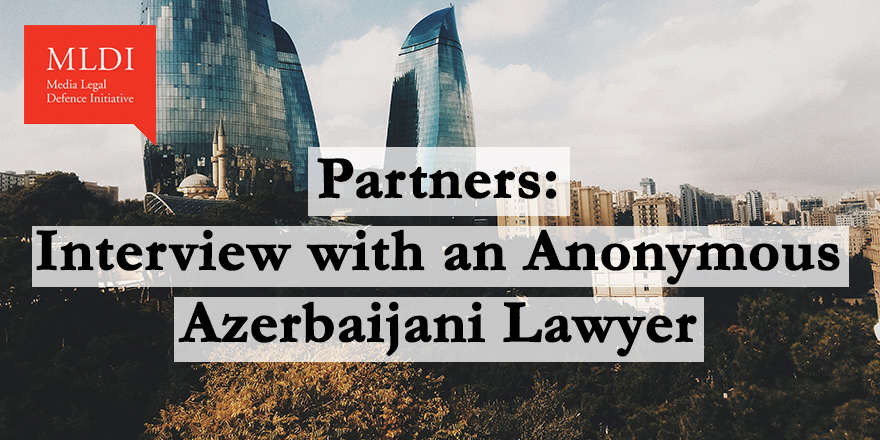 Welcome to the second instalment of our ‘Partners’ blog series. In this series, we interview some of our partners from around the world about their crucial and fascinating work in freedom of expression.

In Azerbaijan, there has been an ongoing crackdown against media freedom for many years. The constant harassment, intimidation and legal prosecution of journalists and bloggers under bogus charges has placed the country as 168th out of 180 in the RSF Press Freedom Index. In this instalment of our ‘Partners’ blog series, we ask an anonymous Azerbaijani lawyer from the Media Rights Group (MRG) about their first-hand experience working to defend media freedom.
Tell us about your organisation.

Media Rights Group (MRG) is a non-registered small organisation, which started to operate two years ago. The organisation has applied for state registration, but the Ministry rejected its application. This problem is related to the political climate in Azerbaijan. The government does not allow any independent human rights organisations to have legal entity status. This problem, in turn, does not allow us to work at full capacity and be productive. The organisation mainly defends the rights of journalists, bloggers, and activists. It takes strategic cases, related to freedom of expression, to the domestic courts and the ECHR.

We think that having an informed society is a crucial element to develop a transparent, accountable, democratic state. The state has such nature that if the society does not control and check, it can become a repression tool in the hands of a person or group of persons. Thus, the freedom of expression as an institution can deter this negative trend.

I do understand that this is a complex process and has many determinants. However, I also believe that an informed society can play a critical deterrent role in this trend. Besides, freedom of speech and expression is the sole most crucial element of having a precious cultural life in society. Thus, by defending the freedom of expression, we think that we provide some help to society.

What are the main tools for censorship used in your country at this moment?

In recent years, the government uses blocking as the primary tool to deter the flow of information in the country. There are many blocked websites.

Secondly, the government uses administrative detention massively against its opponents, activists, and sometimes journalists. It seems that the government thinks that criminal proceeding is an expensive both politically and economically. So they use more soft repression too.

The travel ban was another tool they used, but somehow, they have stopped it. However, the government checks all travellers (who are on their “black list” – I mean people working in NGOs, journalists, some politicians, and so on) when they leave and enter the country. At every travel, the Customs Service obliges you to fulfil a declaration that indicated how much money you take with yourself. The same mechanism is applied to you when you enter the country. For sure, it has no legal basis. You do not need to fulfill any declaration if you do not curry money more than ten thousand USD. But the governments obliges you to show even if you have a penny in your pocket.

What factors (legal and political) have led to the government restricting access to websites? How are civil society and media tackling this?

There are no legal grounds to block the websites. Even though the quality of the legislation in this field is poor, the government does not obey it either. The government works arbitrarily.

We do not have a well-functioning civil society anymore. Very few people working in these fields raise their voices against such a policy as an individual. Thus, it has a small impact.

The media tries to use different technological tools to overcome the problem. We, as an organization, try to help these media by bringing their cases before the national courts and the ECtHR. However, we also lack enough financial capacity to work effectively. Sometimes because of a lack of finance, we cannot support every case.

What do you think is needed to improve freedom of expression in Azerbaijan?

Sincerely, we need to change the current government. All of these years have shown that the government with current people in power is not going to change its policy fundamentally.

I think that what is valuable in our work is defending journalists and media. This somehow deters the repression or at least make it softer. I try to keep people safe.

Moreover, international institutions, but more importantly, democratic and powerful countries, can play an essential role in making the Azerbaijani government change its policy. Thus, advocacy can play a crucial role in this process. I guess without these supports, the current government could have been even more brutal.

What are the main challenges you face, both practical and legal, when litigating in favour of media freedom in your country?

We basically do not have an independent court system, and our efforts have no fruits within this system. Thus, we take our cases, with the hope of winning, to the ECtHR.

Practically, it is mostly related to finance. Our organization has no legal entity status. Thus, we cannot open a bank account and get enough grants to have the full operational capacity. Thus, most of the donors are refrained from supporting us. The donors would also need to change their policy if they want to work in such an environment, but very few of them are eager to do that.

Besides, technically it is also not easy to get money in Azerbaijan. People use different methods to get financial support. Most of the people that I know working in this field do not pay taxes. They suspend the tax registration because the government had used the tax payment to track the grants and repress them.

Thanks so much for speaking to us.

Thank you for supporting us!

Getting to Know: Chambers Diversity & Inclusion

In September 2019, Media Defence was announced as the charity partner of the Chambers and Partners Diversity and Inclusion Awards. The Chambers Diversity and Inclusion Awards aim to recognize and celebrate law firms’ pro-bono achievements and contributions to diversity within the legal profession. The partnership provides opportunities for fundraising and expansion of our pro bono […]

The African Commission of Human and People’s Rights has found that Rwanda violated the right to freedom of expression of two journalists, Agnes Uwimana Nkusi and Saidati Mukakibi, after they were convicted and imprisoned on national security offences for publishing a series of articles criticising the Rwandan Government and President Paul Kagame. Ms Uwimana was […]

Media Defence is excited to announce its new eReader which is now the home to the new Advanced Modules on Digital Rights and Freedom of Expression Online! The eReader has been developed as part of our Digital Rights Advocates Project (DRAP) which is funded by the US Department of Democracy, Rights and Labor and supports […]