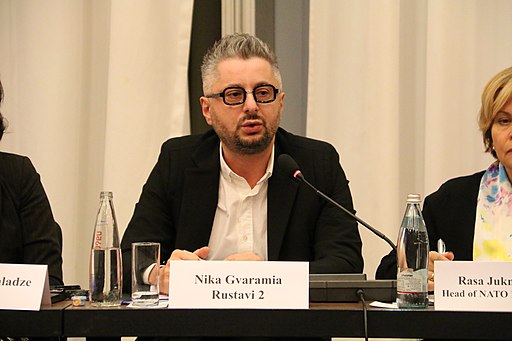 Nika Gvaramia is a Georgian journalist and leading opposition politician. Gvaramia was Minister of Justice and Minister of Education and Science under former President Mikheil Saakashvili and is a prominent critic of the current Georgian government and the ruling Georgian Dream party.

In May 2022, Gvaramia was convicted on charges of abuse of power and sentenced to three and a half years in prison. He was accused of using a company car for private purposes while serving as director of Rustavi 2, an opposition TV station. In October 2022, the Tbilisi Appeals Court rejected his appeal against conviction and sentence. The case is now at the Georgian Supreme Court.

Following his conviction, the U.S. Embassy in Georgia issued a statement noting that the conviction and sentence “calls into question Georgia’s commitment to rule of law.” Numerous international and Georgian NGOs have criticised the conviction as being politically motivated and designed to silence Gvaramia.[1][2][3][4] Notably, the conduct of the prosecution has been criticised, with observers noting that Gvaramia did not receive a fair trial.

Gvaramia’s lawyer has described the court’s finding as ‘absurd’ and noted that evidence provided at the trial – that he had been permitted to purchase and use the car and that there was no precedent in Georgian law for imprisoning a director for using a company’s assets – was ignored. The lengthy sentence has been criticised as being manifestly disproportionate.

In recent years, several international institutions have expressed concern over the state of media freedom and judicial independence in Georgia. For instance, the Council of Europe’s Commissioner for Human Rights has pointed out that high-profile trials have been allocated to judges considered loyal to the government. In its recent recommendations to Georgia regarding the country’s application for candidate status, the EU has called upon Georgia to “ensure a judiciary that is fully and truly independent, accountable and impartial along the entire judicial institutional chain, also to safeguard the separation of powers; notably ensure the proper functioning and integrity of all judicial and prosecutorial institutions, in particular the Supreme Court.” Notably the EU has demanded a “free, professional, pluralistic and independent media environment, notably by ensuring that criminal procedures brought against media owners fulfil the highest legal standards”.[5]

Media Defence is concerned that Gvaramia has been convicted because of his work as a journalist as well as because of his political views. The Georgian Supreme Court now has an opportunity to remedy this miscarriage of justice by overturning his conviction and ordering his release.