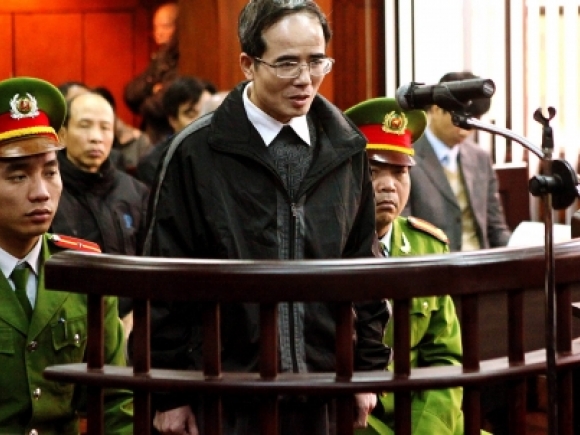 A coalition of 14 human rights NGOs and networks strongly condemns this week’s decision by an appeal court upholding a 30-month prison sentence for Vietnamese human rights lawyer and blogger Le Quoc Quan. Mr. Quan has been detained since December 2012.

The coaliton believes Mr. Quan’s detention is politically motivated and a reaction to his blog, where he frequently exposes human rights violations by the Vietnamese government. Mr. Quan is a victim of a coordinated government crackdown on bloggers, citizen journalists and pro-democracy activists.

On 18 February, an appeal court upheld the 2 October 2013 conviction of Mr. Quan for trumped up charges of tax evasion and his sentence of 30 months in prison and a fine of 59,000 USD. This Appeal decision comes just months after Vietnam joined the United Nations Human Rights Council  (UN HRC) in November 2013.

“Vietnam’s continued persecution of its human rights defenders raises troubling questions about its membership on the UN HRC,” says Thomas Hughes, Executive Director of ARTICLE 19. “Being a member of the international human rights community imposes obligations to respect and protect human rights. Vietnam will be judged on how it treats its people. Mr. Quan’s case clearly demonstrates the Vietnamese authorities are currently failing to ensure protection for fundamental rights, including freedom of expression”.

“Viet Nam’s decision to uphold the unjust conviction of Mr Quan is a clear violation of Viet Nam’s obligations under international law,” says Nani Jansen, Senior legal Counsel of the Media Legal Defence Initiative. “By disregarding the clear findings of the UN WGAD that his imprisonment was in violation of his right to free expression and right to a fair trial, and turning a deaf ear to their call for his immediate release, Viet Nam has failed to live up to its international obligation to ‘uphold the highest standards in the promotion and protection of human rights’.”

In an Opinion published on 29 November 2013, the WGAD rejected the legitimacy of the conviction and the legality of the detention. The Opinion concluded that Viet Nam had failed to observe fair trial standards and that the breaches were of such gravity as to render Mr. Quan’s detention arbitrary and contrary to law.

“Governments must ensure that lawyers are able to perform their professional functions without intimidation or improper interference. The Government of Viet Nam is doing the exact opposite. Le Quoc Quan must be released from prison immediately,” says Adrie van de Streek, Director of Lawyers for Lawyers.

All four of Mr. Quan’s lawyers, his wife and mother were present during the four-hour trial on Monday 18 February, as hundreds of demonstrators stood outside the court, wearing t-shirts to show support for the jailed activist. A delegation of representatives from the European Union, the United States and Canada were also present to observe the trial, together with a small group of journalists. It has been reported that many of those observing the trial were kept in a separate room in poor conditions.

“The ongoing support Le Quoc Quan has received from his family, friends and the international community remains hugely important. In a recent letter to supporters, Quan wrote how he was ‘deeply moved to know that many of you still care, follow and support my case’,” says Cat Lucas, Writers at Risk Programme Manager of English PEN.

Viet Nam’s human rights record was reviewed at the United Nations on 5 February 2014, during the Universal Periodic Review. Many states, including the United Kingdom, the Netherlands, Ireland, and Australia called for Viet Nam to cease its crackdown on free speech on and off-line. However, less than a week later, eight bloggers and activists were beaten by plainclothes police officers and arrested in the southern province of Dong Thap.

Le Quoc Quan is nothing short of a Vietnamese patriot, a man most concerned about improving the lives of his fellow citizens, a person who cares deeply for his country and who is optimistic about its future. We salute his courage and urge the Government of Viet Nam to respect his fundamental right to freedom of expression and association,” says Carl Gershman, President of the National Endowment for Democracy.

The coalition calls for the Vietnamese government to release Le Quoc Quan, as well as the many human rights defenders, bloggers and activists currently detained for exercising their right to freedom of expression.