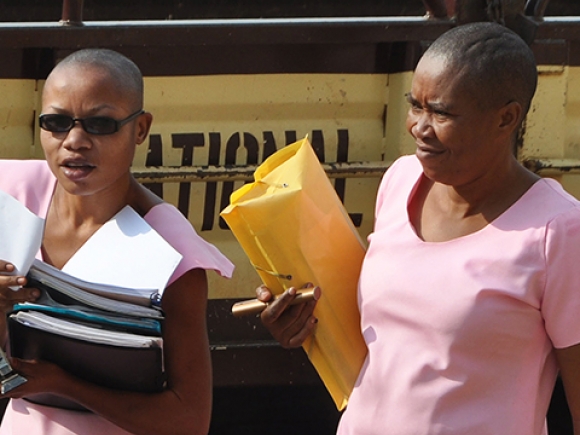 Agnès Uwimana and Saidati Mukakibibi wrote for a local Rwandan newspaper, Umurabyo. Some of their articles displeased the Rwandan government. The result: seventeen and seven years in prison on grounds of defamation, threatening national security, “divisionism” and genocide denial. In January 2012, Nani Jansen, MLDI’s Legal Counsel, flew to Kigali together with barrister John Jones to represent the journalists in their appeal before the Rwandan Supreme Court alongside their local counsel.

Since the genocide came to an end in 1994, Rwanda has been considered a shining example of post-conflict reconstruction. The country is stable and shows a steady economic growth. That members of opposition parties and journalists are routinely silenced, is conveniently ignored by most.

In this sense, Agnès and Saidati’s case is not unique. While Rwanda appears to be fully engaged in a process of media reform, no less than 18 journalists fled the country in 2011. Whatever changes are being made on paper, as it stands, a free press is practically non-existent in Rwanda.

MLDI’s support to the two journalists initially consisted of financial assistance for their legal costs and the providing of input on the legal arguments. However, as the date of the appeal drew closer, the Rwandan lawyers requested more hands-on support; they did not feel they were at liberty to conduct as solid a defence as needed on the issue of freedom of expression. At that point, international criminal law specialist John Jones and I joined the defence team. We submitted an appellate brief in French and flew to Kigali.

The court room of the Rwandan Supreme Court is state of the art: filled with cameras, microphones, big flat screen computers, and monitors. These high-tech gadgets form a slight contrast to the energy supply at the Court: every couple of minutes the lights would go off, and after a little while they would come on again, ticking loudly. No one blinked an eye when this happened. Our clients arrived in Court dressed in the standard pink Rwandan prison gowns, their heads shaven. We had plenty of time to speak before the hearing started. They told us about life in the notorious “1930” prison: one cell for 30 prisoners, all sharing beds. One shower and one toilet for every 100 prisoners. Food had to be brought or paid for by relatives, lest they had to make do with the minimal weekly rations provided by the prison.

When the judges arrived, it initially looked like the case would be adjourned once again. The appeal had originally been scheduled for November, but was then postponed until January because the Prosecution was not ready. This time, there were procedural issues that had to be decided concerning the admissibility of a number of amicus curiae briefs. The Court felt it needed some time to deliberate and suggested a one month postponement: amicus submissions were not provided for by Rwandan law and they wanted to know if there was any convincing precedent on the issue. Fortunately, the President was persuaded by our argument that the journalists had waited almost a year for their day in court, that counsel had flown in from London, and that that the procedural issues need not prevent the hearing from taking place – whether the amicus would be accepted or not, we could still discuss the substance of the case. After a brief adjournment, the hearing proceeded and the defence was given the floor.

In their pleadings, the Rwandan lawyers focused on Rwandan law; we addressed the international and comparative law aspects of freedom of expression, general principles of international criminal law and sentencing. During our meetings with local counsel before the hearing, they made it clear that what needed to be submitted to the court most of all was case law. Which is what we did; we presented the most relevant precedents and standards set by international human rights bodies, and showed how these norms had been implemented by courts in the region.

The Court listened to our arguments with undivided attention and especially the President asked good, critical questions. This would also be the only time when you would actually get to see the judges during oral argument. Because of the enormous computer screens on their desk, the only thing betraying the presence of the judges was the view of their feet beneath it (I believe one of them forgot that this was the case, because she kicked of her shoes at some point in the afternoon). You could tell that there were questions the moment a head popped up from behind the screen.

Another thing that struck us about the proceedings was that the journalists themselves were given ample opportunity to speak and the type of questions they were asked. These often did not merely relate to the facts of the case, but their legal qualification. Coverage in some local newspapers reflected the risks that entailed – it provided ample opportunity for misunderstandings between the panel of judges and the defendants. The next day, the Prosecutor took the floor, after which the defence was given the last word.

Judgment was postponed twice; first to reach a decision on the amicus submissions and then because there was “evidence that required further investigation.” Eventually, the Supreme Court handed down its judgment on 5 April 2012: acquittal on genocide denial and divisionism and sentence reduction for the charges of threatening national security. Agnès’ sentence was reduced from 17 to four years in total and Saidati’s from seven to three.

Minus time served, the journalists will have to spend two and one more years in jail, respectively. While this is a significant improvement, even this short(er) period of detention could mean a death sentence for especially Agnès. She is HIV-positive and the lack of proper nutrition and regular medication could take its toll at any moment. MLDI continues to pursue their release and explore options to clear their names of all charges.