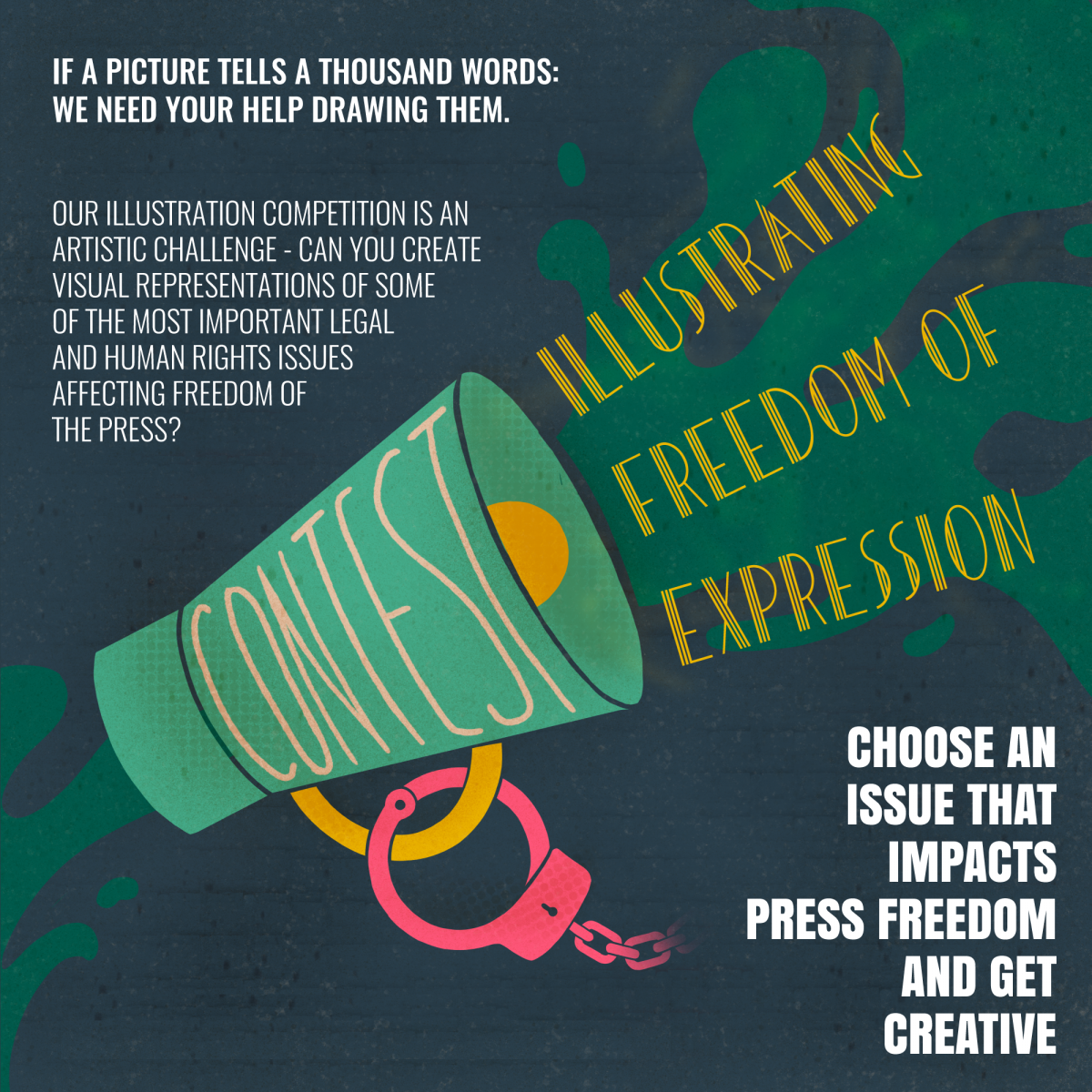 Pictures tell a thousand words and we need your help to draw them. Our illustration competition is an artistic challenge: can you create visual representations of some of the most important legal and human rights issues affecting independent journalists around the world?

Winners will be featured online and in print as part of our 10 year celebrations – you will be helping us to communicate our work and helping us to reach more journalists and supporters.

Media Defence turns ten years old this year. We support journalists, bloggers and independent media under legal threat so they can continue to report freely. Over the past decade we’ve provided legal defence in over 1,000 cases in 94 countries around the world.

Our work is vitally important. A free press is vital to the human right to freedom of expression, but without legal support, journalists are at a greater risk of jail, closure and fines.

We want to explain the issues in a short, punchy way, through art. This illustration competition is a sneak peek of our ten-year celebrations to follow later in the year.

The challenge is to create a visual piece of art which represents or demonstrates the issues. For each issue we’ll pick a winning image which will be featured as part of our 10 year celebrations, and seen by audiences around the world both online and in print.

Anyone can enter this competition – any age, any skill level, from anywhere in the world. You can use any visual medium that can be submitted electronically as a JPG, PNG, PDF or TIFF file.

You might choose to create one piece of work for one issue, do one piece for every issue, or submit a number of pieces all about the same issue. It’s up to you.

Need some more inspiration? Why not speak to a journalist in your country about the challenges they face? Or explore our work and case studies.

The winners (and other selected pieces) will be announced on our website and social media channels to our international audiences, and will feature in our ten-year celebrations.

Need some more inspiration? Why not speak to a journalist in your country about the challenges they face?

The (original) artwork can be any size, any style, and in any visual medium: ink drawings, cartoon strips, collages, painting, even sculpture. However all entries must be submitted – and will be judged – as images in JPEG, PNG, TIFF or PDF formats.

Send submissions using our application portal – please contact patrick.regan@mediadefence.org if you experience any problems with the submissions portal.

Media outlets can be shut down or restricted through the use of administrative measures. For example, refusal or extended delay in issuing licences to media outlets is used to prevent them from operating. Or media outlets are closed after receiving government ‘content warnings’ which are often arbitrary and targeted at outlets critical of the government; these warnings are both a threat and a method of silencing dissenting voices.

As the world becomes ever more connected the devices we use can be used to trace us, however anonymity can be crucial for journalists in order to do their jobs.  Staying anonymous or using a pseudonym can protect people from being threatened, followed, arrested, prosecuted for defamation, or hurt while exercising their right to free expression.

In many countries, journalists face criminal defamation charges and prison sentences for writing or speaking critically – even in some instances where the ‘defamatory’ statement is proveably true.  Criminal defamation laws are  open to abuse and are one of the leading reasons that journalists are in prison around the world.

Overly broad Cybercrime legislation and sweeping internet regulations are being used by some governments to censor criticism online. One blog was found liable for ‘intermediary defamation’ for hyperlinking to critical content on another website. In other cases newspapers have faced charges over comments section posts from the general public.

5. Fabricated and trumped up charges

Often governments don’t explicitly prosecute journalists for what they publish, but some journalists and bloggers who write critically face fabricated or trumped up charges. Journalists have been arrested, detained and sentenced for a wide range of charges, including drug offences, anti-social behaviour, incitement to violence, kidnapping or tax offences. Newspapers have been shut down with charges of ‘damaging the economy’.

Protecting a journalist’s sources is an essential principle: both for accurate reporting, and to keep journalists and their sources safe. Attempts by police or governments to force journalists to reveal the identities of the people they speak to are extremely dangerous to press freedom. If people think their information will not be kept confidential they might not speak to a journalist, impacting the quality of reporting and reducing the press’s ability to be a ‘public watchdog’.

What if you woke up one day to find that your government had switched off the internet? Politically motivated web blocking and internet blackouts silence people by cutting them off from the rest of the world and stopping them from accessing information or reporting freely. When media outlets are disconnected from the internet it is almost impossible to operate. Between July 2015 and June 2016, internet blackouts happened 81 times across 19 countries.

Physical harassment and violence are used by state and non-state actors to silence journalists and make people too afraid to report, creating a chilling effect. Journalists in detention in various countries around the world are subjected to cruel, inhumane and degrading treatment, and to torture – both crimes under international law. Last year Media Defence worked on 13 cases relating to torture in five countries.