Human rights lawyer detained for blogging and advocacy must be released 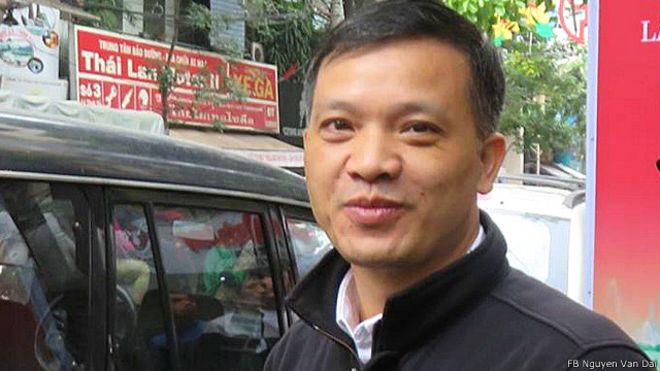 Nguyen Van Dai – a prominent human rights lawyer and blogger in Viet Nam is being detained incommunicado for exercising his right to free speech.

Nguyen Van Dai has been in prison since 16 December 2015 when he was arrested on a trumped-up charge of “conducting propaganda” against the state.

Media Legal Defence Initiative is working with PEN International, Lawyers for Lawyers, Lawyers Rights Watch Canada and Viet Tan to fight for his release from prison. On Friday, MLDI filed a petition with the UN Working Group on Arbitrary Detention urging it to intervene in his case.

MLDI’s Senior Legal Officer Alinda Vermeer said: “Time and time again we have seen ill-defined offences such as “conducting propaganda” being used as an easy way to quash any kind of dissent and to arbitrarily detain individuals who dare to speak out against the Vietnamese government. We call on the Working Group to urge Viet Nam to immediately release Nguyen Van Dai.”

Nguyen Van Dai has been a courageous advocate on blogs and social media for democracy and human rights in Viet Nam. He is a leading human rights defender who trains community members on their legal rights, has litigated cases defending human rights and is the co-founder of Brotherhood for Democracy.   Nguyen Van Dai has been repeatedly targeted for his outspoken advocacy. He has already served an eight-year term of imprisonment for the offence of “conducting propaganda” which ended in March 2015. At the time of his arrest, Nguyen Van Dai was on his way to a meeting with delegates from the European Union as part of the annual EU-Vietnam Dialogue on Human Rights.

Repression of bloggers and journalists is common in Viet Nam, which ranks alongside North Korea and Eritrea in the top six state offenders against press freedom. The offence of “conducting propaganda” is punishable by up to 20 years’ imprisonment. Despite facing a serious charge, Nguyen Van Dai has been denied access to a lawyer and all contact with his family for the past 11 months. Mr Nguyen’s family is extremely concerned that he may not be receiving adequate medical treatment for a pre-existing condition.

In October 2016, the UN High Commissioner for Human Rights condemned the growing crackdown in Viet Nam on human rights defenders, journalists and bloggers, including the detention of Mr Nguyen. NGOs and UN bodies have repeatedly called for the offence of “conducting propaganda” to be repealed from the Criminal Code.