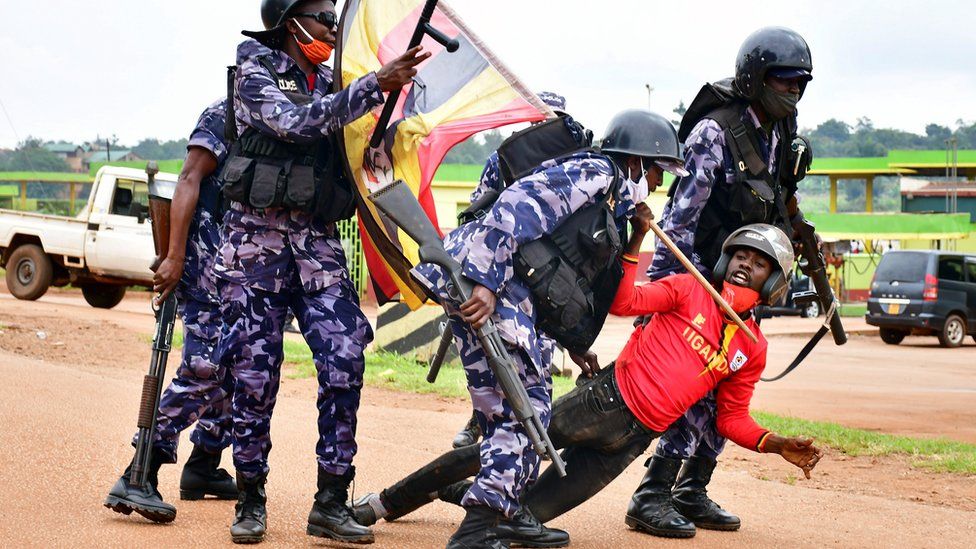 We supported the Uganda-based Human Rights Network of Journalists (HRNJ-Uganda) between 2013 – 2015, and then again in 2018. Our support was primarily financial, with grants to support their work in defending media freedom through litigation. Consequently, we have asked HRNJ-Uganda to complete a Most Significant Change evaluation. These evaluations help us to understand the impact of their work and of our support. Then we collate and analyse these stories each year. As a result, we are able to identify themes and ensure that we understand current trends in media freedom.

The Human Rights Network for Journalists in Uganda (HRNJ-Uganda) is an NGO established in 2005 by a group of journalists and media freedom activists. HRNJ-Uganda has a diverse membership of over 700 journalists from both print and electronic media, as well as freelance investigative journalists and students. HRNJ-Uganda’s mission is to effectively represent journalists whose freedoms are curtailed. This not only means taking on cases, but advocating for the creation of protective laws too.

During the grant period, violence towards journalists remained high in Uganda. This is demonstrated by the case of William Mutyaba, a field journalist working for a television station in Kampala. In 2018, students of St Augustine Secondary School assaulted him after one of their teachers instructed them to do so. He sustained injuries around his back, chest, neck, and left eye, resulting in hospitalisation at Kampala Hospital. HRNJ-Uganda filed the case at the High Court of Uganda using funding from Media Defence.

For HRNJ-Uganda, this case is a significant one. It demonstrates the way in which threats of violence can lead to self-censorship by journalists. While Mutyaba continues to report, many other journalists fear the reprisals for carrying out their work. Ultimately, the serious risk of violence limits the subjects on which journalists are willing to report.

Since 2013, HRNJ-Uganda has been providing free legal services to journalists who have been prosecuted because of their work and who cannot afford the legal frees. HRNJ-Uganda was responsible for important assistance in 2018. The Director of Public Prosecution dropped the case of a journalist battling a treason charges at the High Court of Kampala. Similarly, HRNJ-Uganda’s intervention helped in the cases of several other journalists, resulting in the prosecution dropping charges against them.

However, threats and attacks against journalists remained high. HRNJ-Uganda said, ‘The media space has been gradually shrinking due to numerous attempts by state actors to limit media coverage of the prevailing political, social and economic circumstances in the country.’

HRNJ-Uganda took the case of Twaha Mukiibi, a journalist working with NBS TV. Police officers in Kyengera, a Kampala suburb, assaulted Mukiibi while he interviewed leaders of the notorious ‘Kifeesi’ gang. A medical doctor assaulted another journalist, Sheikh Abdurhatifu, when he was covering the story of a woman wrongfully diagnosed with HIV/AIDS. In July, a mob attacked a journalist covering the Sheema by-elections in Western Uganda, while the police watched on. In the same month, several incidents followed in Katakwi district in Eastern Uganda. Police assaulted several journalists in a span of less than a week while covering protests in the district about mobile money tax and service delivery. These examples show high levels of violence towards journalists reporting on a range of topics.

Later that year, a number of journalists faced violence at the hands of the security forces. Security officers attacked and beat journalists live on air as they reported the events in Arua during by-elections on 13th August 2018. The authorities later charged the journalists with incitement to violence and malicious damage to property. Elsewhere, police forcibly arrested another journalist and detained them at an unknown location.

The #FreeBobiWine political protests are yet another example of repeated and assaults by soldiers towards journalists covering political issues. HRNJ-Uganda report that security forces, deployed to quell the riots, forced journalists covering the protests to delete footage from their cameras and phones. Others received anonymous death threats, and accusations of promoting the opposition party. Around the same time, an anonymous source released a list of journalists on social media, claiming that they were attempting to overthrow the government. Even though the source of the list is unclear, the very existence of the list attests to a concerning pattern of violence targeted at journalists for their coverage of local elections.

What have we learned?

From the cases described above, it is clear that media in Uganda face significant challenges, across a range of public interest issues. HRNJ-Uganda report that the situation is likely to remain volatile, particularly around election time.

Importantly, HRNJ-Uganda has identified an emerging theme from their cases. The behaviour of authorities points to a deliberate attempt to prevent journalists reporting from the scene of protests. Many have observed that while dispersing protests, security forces often attempt to intimidate witnesses. This would indicate, therefore, that there is a wider ambition to impede the documentation of historical events, and to limit citizens’ access to information generally.

Currently, Uganda is ranked 125 on RSF’s World Press Freedom Index. They say that acts of violence against reporters are ‘almost a daily occurrence.’