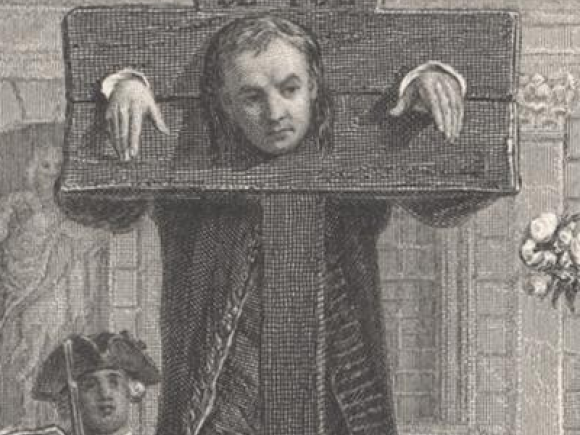 While it’s rare to be prosecuted for it in western democracies, Peter Noorlander, MLDI’s CEO, explains how authoritarian governments frequently use old colonial sedition laws to silence criticism.

In 1703, Daniel Defoe was accused of seditious libel and put in the pillory for three days.

“In India, over the years, hundreds and hundreds of (sedition) cases have been brought, and it’s seen as one of the biggest threats to press freedom. There are a large number of trials but very few convictions. Here, the purpose is pure harassment of journalists.”

What are the origins of sedition and how is it defined?

This is a very old criminal offence under English common law that dates back centuries. It goes as far back as 1275 and can be broadly defined as criticism that causes the public to lose faith in – or act violently against – the government.  The offence was punishable with unlimited fines or

imprisonment. But it was last used in the UK in the early 1970s, against IRA organisers, and the Law Commission recommended its abolition as long ago as 1977. It was finally scrapped in 2009 along with criminal libel. Most other western democracies have either repealed sedition or discontinued prosecutions.

Where is sedition still an offence?

Many former British colonies, whose legal systems are based on common law, retain sedition on their statute books. It was introduced by the British to stifle dissent during colonial times. In Malaysia, there are more than 50 sedition cases pending against bloggers and activists. As a result, the independent press is increasingly moving online, but even here website owners can face prosecution for publishing seditious comments. In India, over the years, hundreds and hundreds of cases have been brought, and it’s seen as one of the biggest threats to press freedom. There are a large number of trials but very few convictions. Here, the purpose is pure harassment of journalists.

How do you go about defending a sedition charge?

It differs from country to country. In India, cases are often poorly constructed and if you can argue that an allegedly seditious report “merely criticised” government policy, then there is good chance of throwing off the charges. In other countries, it may not be possible to use such an argument, and it’s also not necessarily a defence to argue that the report was true. In Zambia and Tanzania, for instance, where intolerance of press freedom is such that there are few independent media left, the only effective way to fight a sedition charge may be to go all the way to the Supreme Court and challenge its constitutionality. But to be successful, this needs to be supported by a high profile campaign by local and international rights activists to put pressure on the authorities.

We are currently helping a number of journalists defend sedition charges in countries including Zambia, Tanzania and India. In nearly all of them the journalists are being sued for publishing reports that were critical of the government or because they are associated with controversial news websites.

What can journalists do to guard against sedition charges?

As always – get your facts straight and make sure that any accusations or allegations are well -researched. But even then, it is entirely possible for charges to be brought, particularly with regard to opinion pieces. A good example is how sedition laws were used against journalists in Uganda. On several occasions, they were prosecuted for opinion pieces. One article made fun of the canvassing efforts of President Yoweri Museveni’s ministers, commenting that they would be better off talking to the president’s cows. This joke landed the journalist in prison for a week. Uganda’s sedition laws were eventually declared unconstitutional in 2010, following a court case that itself had lasted five years, with a court judgement that resoundingly declared that the sedition law is a tool of repression.

Have any other former colonies scrapped sedition?

An important consideration in the UK’s decision to abolish sedition was the view that its existence had been used by other countries to justify retaining the law. Many other former colonies have debated or pledged to abolish sedition, but few have actually done so. The Indonesian Constitutional Court in 2007 declared the Indonesian version of sedition to be unconstitutional – it had been based on offences introduced by the Dutch former colonial powers. It remains to be seen whether other governments will follow. Authoritarian governments will be reluctant to remove such an effective tool for silencing criticism. In Uganda and Indonesia, it took the courts to take action and perhaps this will be the way to go in other countries.