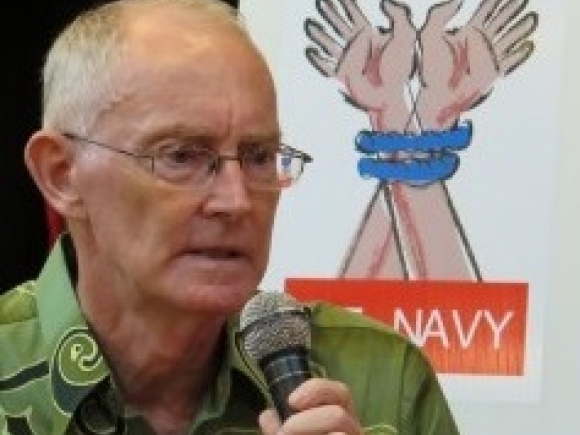 Photo credit: Photo of Alan and Chutima and headshot courtesy of Lana Willocks.

The editor and a journalist for Thai news website Phuketwan, Alan Morison and Chutima Sidasathian, are about to go on trial for defamation in relation to a quote in an article on the trafficking of Rohingya refugees. As the trial date draws closer, Alan Morison describes the impact of the case on Phuketwan and press freedom:

Regular readers of Phuketwan will note that the ‘Coming Events on Phuket 2015′ in the daily PhuketWATCH column lists ‘July 14-16 Trial of Phuketwan journalists at Phuket Provincial Court’ and draws to an end soon after.

In practical terms, we haven’t quite yet figured out how our coverage will be sustained during the trial and what might happen to Phuketwan once a verdict is given.

The future of the popular news site is clearly on the line. We believe readers interested in a more just and equitable world will miss the site if it goes.

Closure is certainly a possibility, triggered by an absurd and ill-advised criminal defamation action, conceived by one or two officers, that will inevitably heap added criticism on the Royal Thai Navy and further diminish the reputation of ”democratic” Thailand.

Journalists Alan Morison and Chutima Sidasathian have been told more than once that if they apologise, the criminal defamation action will disappear.

The Computer Crimes Act counts can only be halted by the Attorney-General but an apology would enhance the possibility of that happening, too.

The two reporters have no intention of apologising for something they haven’t done.

The fuss is over a paragraph republished word for word from a Reuters news agency report. ”When Reuters apologises, we will consider an apology,” the journalists say.

The government appears to be committed to an attempt to save face rather than prove to Thailand and the world that it can tell right from wrong.

These one or two officers made a simple error of judgement. Now the journalists, Thailand and the Royal Thai Navy are to all suffer for that needless mistake.

Given the track record of Phuketwan in exposing the Rohingya abuses in Thailand over the past seven years, there is plenty of cause to speculate why these one or two officers sought to hammer the small news outlet with Thailand’s iniquitous laws rather than settle the matter in a sensible fashion, by making a telephone call to complain to Reuters or to Phuketwan.

Three days after the paragraph appeared – the 41 words do not even mention the Royal Thai Navy – Phuketwan gave equal prominence to the Navy’s denial of any connection with human trafficking.

That should have been the end of it. But no . . . the officer or officers wanted more. Five months later, without any warning, police were asked to act.

Next month’s trial will trigger intense interest, with the reporters facing up to seven years in jail.

The hearing not only focuses attention again on the Rohingya exodus and the Thai military’s worryingly intimate relationship with Burma, but also highlights the issue of media repression in Thailand.

The case predates the military takeover but the disinclination to end it speedily and honorably will inevitably create even greater concern about whether this government can tolerate a free media – and how it plans to permanently end the extortion and torture of the Rohingya Muslims.

ALAN MORISON and Chutima Sidasathian remain on bail of 100,000 baht each, provided by the Andaman Community Rights and Legal Aid Centre, based in Trang province. Other groups and organisations have also offered financial help. Most of the legal costs of the case are being met by the London-based Media Legal Defence Initiative.

In Thailand, a group of more than 10 lawyers have teamed up to provide legal counsel. They include the Human Rights Lawyers’ Association, iLaw and SR Law.

WATCH Journey into Hell, by Four Corners
From Burma through Thailand, an award-winning current affairs team traces official complicity in the brutal treatment of the Rohingya and Phuketwan’s part in its exposure.
http://www.abc.net.au/4corners/stories/2015/06/22/4257490.htm

– Alan Morison, editor, Phuket Wan. This post was originally published on the Phuket Wan website and is reproduced with kind permission and thanks. MLDI provides financial support for the defence of the case.