Media Defence supports more new cases in 2017 than ever before 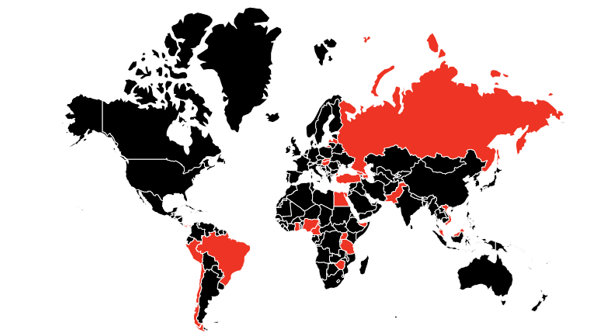 This increase in demand for MLDI’s services reflects the wider trend globally to restrict press freedom, described by Freedom House in their 2017 Freedom of the Press Report as “at its lowest points in 13 years”.

Countries MLDI has supported new cases in during 2017 (red)

Perhaps unsurprisingly, the majority of the newly supported cases have come from Azerbaijan, Russia and Turkey – three countries which are home to particularly hostile environments for journalists, bloggers and media outlets and where media freedom is seriously threatened. Reporters Without Borders 2017 Press Freedom Index ranks all three of these countries towards the bottom end of the index, with Russia in position 148, Turkey at 155, and Azerbaijan in 162 of 180 countries.

Historically, received few cases from Latin America, equating to less than 5% of its total caseload each year. Interestingly, MLDI is supporting more cases than ever before in Latin America, accounting for almost 15% of the new cases supported in 2017.

The majority of the cases supported so far are related to administrative measures, criminal defamation and other criminal charges.

Although the majority of these new cases are still ongoing, MLDI has seen some positive results already for example in: