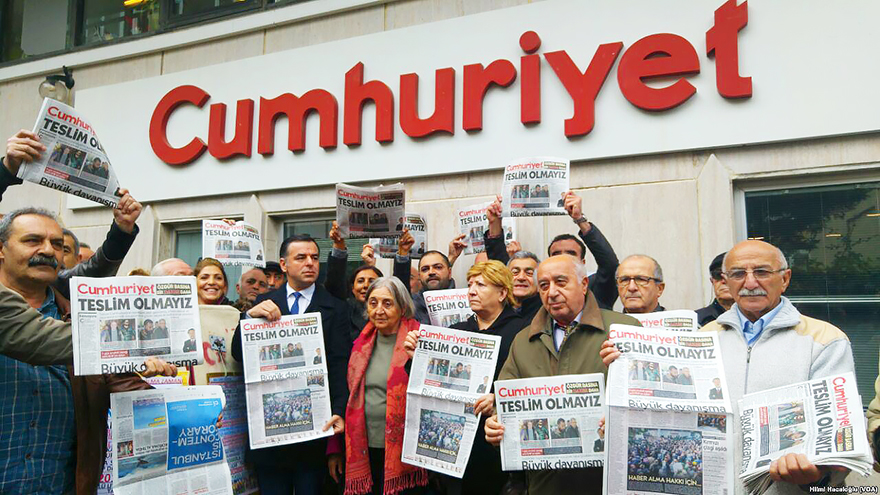 The European Court of Human Rights (ECtHR) has held that Turkey violated the Article 5(1)(c) and 10 rights of ten journalists working at the prominent Turkish newspaper, Cumhuriyet. The journalists were arrested and detained in the government crackdown following the July 2016 attempted coup. Media Defence intervened as a third party in the case, along with 12 other leading freedom of expression organisations.

Turkey’s treatment of the Cumhuriyet journalists attracted widespread condemnation. The journalists were arrested and detained just a few weeks after a state of emergency was declared in 2016, on suspicion of having “assisted” terrorist organisations and disseminated “propaganda” on their behalf. The charges were based on articles published in the newspaper and on material shared on social media which was critical of the government. They were subsequently convicted and sentenced to lengthy prison terms. In its judgment, the Court held that there had been no “reasonable suspicion” that the applicants had committed any of the offences alleged, noting “that the logic applied in the present case by the authorities responsible for the applicants’ pre-trial detention, equating these activities to assisting a terrorist organisation, cannot be regarded as an acceptable assessment of the facts”.

Having found that their detention was unlawful, the Court also held that authorities had violated the journalists’ right to freedom of expression. Disappointingly, the Court found no violation of Article 18, finding that authorities had not pursued an ulterior purpose, despite the applicants’ contention that they had been targeted in an effort to punish and silence their reporting. In its intervention, the interveners set out the legal principles relevant to assessing alleged violations of Article 18. It urged the Court to closely scrutinise the circumstances in which journalists critical of the State are targeted because of their criticism, particularly where there is an emerging pattern of human rights restrictions and emergency decrees or national security laws are being used to restrict fundamental freedoms.

In a strongly worded dissent from the finding of no violation of Article 18, Judge Kūris condemned Turkey’s treatment of the journalists as “political persecution of the media”. Considering the applicants’ arrest and detention to be “only clumsily camouflaged in legal robes”, he found that Turkey had acted with an ulterior purpose:

“[H]ow else could one assess such measures taken against the journalists, editors or managers of a newspaper critical of the authorities, primarily on the basis that, in the authorities’ reading, the newspaper’s editorial stance had changed… and it had published something which, in the authorities’ view, was glaringly at odds with the world view of its readers”.

Importantly, Judge Kūris also emphasised that this case “is not an isolated one”, but part of a pattern of behaviour aimed at “the silencing, post-military coup Turkey, of civil society in general and the media in particular.”

The ECtHR’s condemnation of the journalists’ arrest and detention in its judgment must be welcomed – particularly in light of their subsequent conviction and sentencing. However, the majority’s opinion once again raises questions about the ECtHR’s willingness to engage with the full extent of the human rights crisis in Turkey, which has arisen in aftermath of the coup and the state of emergency that followed. This was evident in Judge Kuris’s criticism of the reasoning for finding no violation of article 18, where he noted that, “[T]he third-party interveners presented their submissions in the present case to the Court in the same document as their submissions regarding the applications in other cases. And for good reason, since they regarded all these individual cases (including the present one) as related to each other and disclosing a pattern of conduct on the part of the Turkish authorities vis-à-vis their opponents. These cases are thus seen as united by the synergy and system in the authorities’ actions against various applicants and the policy behind those actions.”

The Cumhuriyet case is one of a group of cases concerning detained journalists in Turkey, to which the ECtHR granted priority status. Alongside this case, Media Defence and the wider coalition also intervened a number of other related cases, which remain pending before the ECtHR.