Arguing the first free speech case at the African Court 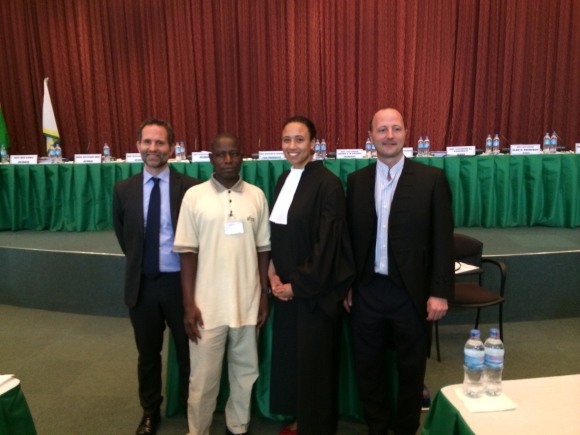 The case was brought on behalf of Lohé Issa Konaté, a journalist from Burkina Faso who served a year in prison for two reports about possible corruption involving a Public Prosecutor in Ouagadougou. In addition to the prison sentence, he was ordered to pay a sum in damages, fines and costs equalling 18 times the annual salary in Burkina Faso and his newspaper was shut down for a period of 6 months. While Mr Konaté served his 1 year in prison, the order to pay damages is still a concrete threat: if he fails to pay, he risks being sent back to prison for another 2 years. Moreover, Mr Konaté has up until now not been able to reopen his newspaper. The decision made by the African Court therefore will have a direct impact on Mr Konaté’s current situation and not serve to merely address a wrong that has already passed.

The Court issued a press release prior to the hearing, announcing that the case was to be heard and inviting members of the public to attend. Arriving at the Court’s premises on 20 March, we were pleasantly surprised to see a huge banner displayed on the gates, announcing the case in French and English and inviting interested parties to attend. After signing in, we were escorted to our own room, where counsel could robe and where the Registrar and Deputy Registrar came to meet us. Before the hearing, there was a brief meeting at the chambers of the President of the Court. We and counsel for Burkina Faso were introduced to the president the programme for the day was explained. 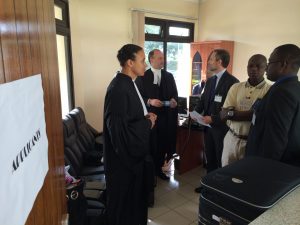 The hearing started promptly at 10am. While the Court’s Rules state that a minimum of 7 judges is required to have quorum to hear a case, all 11 judges currently on the Court’s roster were present for the hearing. The judges took place behind a large table on a podium and the President opened the session, after which the Registrar officially called the case. The setting was nice from a gender balance perspective: both the President of the Court and lead counsel of both parties were women.

Each party was given 45 minutes to present their case, with no additional time scheduled for rebuttal or surrebuttal. However, we diverged from this schedule because counsel for Burkina Faso raised a new point during their argument: having convicted Mr Konaté under the press law,  and having had him serve a year-long prison term, Burkina Faso now suddenly thought Mr Konaté should not be considered a journalist. The President of the Court intervened and allowed us the choice of responding to this new issue there and then or to do so the next day. We opted for the former and explained to the Court in the 10 minutes given to us to do so that Burkina Faso’s sudden confusion regarding Mr Konaté’s status as a journalist not only was in contradiction of Burkina Faso’s own previous submissions and the findings of the Burkina Faso courts, but that if Burkina Faso stuck to its position that an alleged failure to carry a press card was sanctionable under Burkina Faso law, that would constituted an additional violation of Article 9 of the Charter.

Our regular presentation highlighted the most important points of the case and also placed it in its wider context: we stressed that the Court’s decision in this case would not only concern Mr Konaté, but would have an impact on journalists, human rights defenders, political activists and all others throughout the continent who exercise their right to free expression to further a democratic society.  I spoke to these issues, as well as to the content of Mr Konaté’s articles and the disproportionality of the penalties imposed, while John Jones QC spoke on the test the Court would need to apply to determine whether a violation of Article 9 had taken place and the incompatibility of Burkina Faso’s laws on criminal defamation with norms of international law. Steven Finizio of WilmerHale, who, like John had joined the case pro bono, spoke on the issues of admissibility that Burkina Faso had raised in its Response to the original complaint. Each party presented in their preferred language: we pleaded in English and counsel for Burkina Faso in French. There was simultaneous translation between both languages as well as into Arabic and Swahili.

As well as pleading in person, we also provided all our presentations to the Court in writing. In the weeks leading up to the hearing, several documents had been filed with the Court, including the bundle of authorities relied on in our written submissions, heads of argument and, the day before the hearing, a copy of our pleading notes. The Court operates with judges from different legal systems (common and civil law-based) and appears to be aiming to equally facilitate the judges comfortable with both traditions. The exchanges in Court that went outside the programme as it was initially drafted by the Court were requested to be submitted in writing as well — all arguments are carefully recorded in order to assist the Court in its deliberations. Transcripts of the hearing are prepared and everything is filmed.

A first for the Court was that the amici curiae, a collective of 18 national and international NGOs concerned with human rights and a free press who had intervened in the case to argue that criminal defamation violated international law, were allowed to make oral representations at the hearing as well. Having submitted a written brief in January, they were allowed to present their argument for 30 minutes before the Court. Donald Deya of the Pan African Lawyers’ Union and Simon Delaney on behalf of the South African Litigation Centre addressed the court.

Following the presentations, the hearing was adjourned for lunch and for the judges to deliberate on questions for the parties. After reconvening, each judge was individually given the opportunity to address questions to the parties. These questions were to be answered the next day, Friday, during 30 minutes, within which timeframe each party could also respond to points raised by opposing counsel during the Thursday presentations. This is what happened on Friday, with Burkina Faso being given an additional 15 minutes to respond to the submission made by the amici, having argued on Thursday that this had been transmitted to them by the Registrar at a late stage, giving them no time to react.

The Court started its deliberations immediately after the hearing and we were informed they would be working through the weekend as well. Under the Court’s Rules of Procedure, a judgment should be handed down 90 days after the closure of deliberations, which would mean that in the best case scenario the Court will be due to rule in June. However, it is also possible that this will be September or perhaps even later.